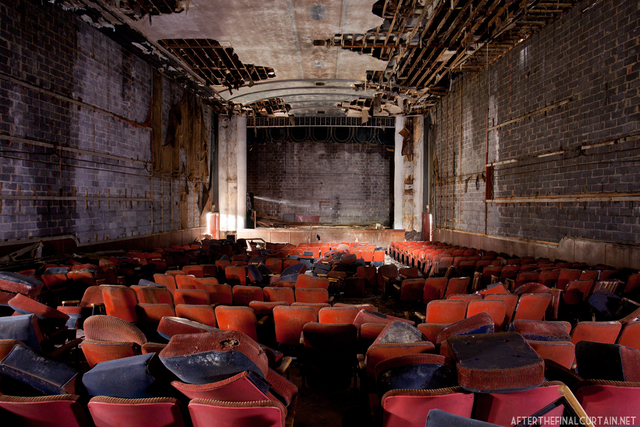 Designed by Abraham Okun in a Streamline Moderne style, the Woodbourne Theatre was opened prior to 1950 and was operated by the Kallet Theaters Inc. chain. It is also known as the Peace Theatre, as its lobby is decorated with the Woodstock Peace Painting (a large mural painted in the 1970’s after the music festival). The theatre is supposedly being renovated although there are no signs of any work as of 2005. I went to see a movie there in the late-1970’s “Roller Coaster”.

The theatre is listed on the National Register of Historic Places.

Well, I am sorry to say that in 2010 the building does not look any better.

I can only hope that the plywood covering the entrance doors is there for protection and not because the Deco doors are missing.

Pity it will rot.

I drove by here yesterday and is’s still like the above photos.

Here’s a blog post and some recent photographs of the Center Theatre.

I remember the Center theater from way back in 1953. We called it the Woodbourne Theater. Nothing lasts forever, even people.

There was a restaurant just over the Neversink River that served the most delicious pizza that I’ve ever tasted.

The River Tavern overlooking the Neversink

A group of friends and myself saw the Chambers Brothers in concert at the Woodbourne Theater in the Summer of 1973. Ticket cost to see the show was $4.00. We were riding our motorcycles back towards our rented bungalow in South Fallsburg when we noticed the Chambers Brothers In Concert advertisement on the theater’s marquee. We immediately pulled over, parked our bikes and purchased tickets. Ten minutes later the Chambers Brothers took the stage and played for two hours. Man, those were the good old days.

Was by the property in August 2019 and it was in terrible shape. A sign on the side of the theater read that the site was to be the home of a medical center.