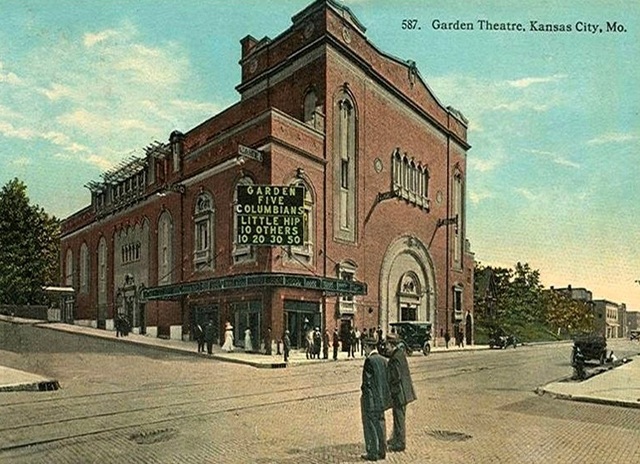 The Garden Theater opened on August 19, 1912 and was designed by Kansas City architect Carl Boller – as were the Empress Theatre, Gayety Theatre, and Midland Theatre.

The Garden Theatre was in an Atmospheric style to give the impression of being in an actual garden. Representing the exterior of other buildings, the theatre’s interior was dark red pressed brick. The ceiling of the theatre was colored to resemble the sky and incorporated paintings of clouds and tiny, twinkling lights to serve as stars.

As a vaudeville house seating 2,600 people, the Garden Theatre was Kansas City’s largest theatre at the time. Nine years after it opened, the owners of the Garden Theatre completely remodeled its interior. The original garden motif was abandoned in favor of a more sedate combination of white and gold walls accented with scarlet drapery.

Sadly, cosmetic realignments were not enough to draw the crowds as waning interest in vaudeville acts contributed to the Garden’s decline, and the theatre was demolished in 1930.

Charles’s link shows one picture of the Garden theatre, more info and the Bygone artilcle listed above can be viewed at:
View link

Regarding the statement: “The Garden Theater opened on August 13, 1912 and was designed by Kansas City architect Carl Boller — as were the Empress, Gayety, and Midland theaters.”

Thomas Lamb was the primary architect of the Midland Theater, and the Boller Brothers were the supervising architects.

In addition to the Granada Theater in Kansas City, KS, only two other atmospheric theaters designed by the Boller Brothers remain open to the public in the USA. They are the Crown Uptown Theater in Wichita, KS; and the Poncan Theater in Ponca City, OK.

Only about 35 Boller theaters remain open to the public nationwide out of the more hundreds they designed. Four of these are in the Kansas City metro area: Granada, Benton. Rio, and Aztec/Fine Arts/Mission Theater. Of the four, three are still operating as theaters. The Benton Theater operates as a church.

The Plaza Theater still exists, but the lobby is now the site of Restoration Hardware. The theater is said to be intact, but the atmospheric elements of the lobby were reportedly lost in the renovation for the retail store.

The Garden Theater was for a time called The Hippodrome Theater.