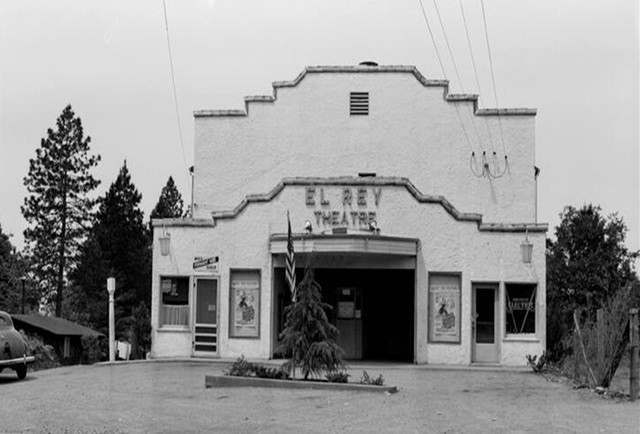 Paradise was still a small mountain town whose local economy was centered on lumbering and apple growing when the El Rey Theatre was built in 1924. The theatre itself was of modest size, and of a simplified Mission Revival style. It was still open into the 1960’s. The vacant building was damaged by fire in 1976 and was demolished.

This theatre was located on Skyway Road, which was formerly called Neal Road.

Here’s a 1945 photo of the El Rey Theatre in Paradise, from the Eastman’s Originals Collection at U.C. Davis.

Always enjoy the contributions by Joe Vogel. Been busy for past year and just getting back to listing more info and memories. I managed the El Rey and Pine Breeze drive-in during the early 1960s. These both were owned by Fred Naify, who also was a district manager, within the family owned business of T&D in S.F. As a teen in Sacramento I started working as ‘poster-marquee-gopher kid’, and advanced to asst mgr. at the California Theatre. Shortly after it burned down I went into military service. After discharge I was hired on as new manager for Paradise. The beautiful, small and quiet town is just up the foothills from Chico. At the time, the main Hwy and street was/is the Skyway,(noted by Mr. Vogel). Neal Rd was/is another area of the town and Neal Rd runs parallel with Skyway and finally intersects,(north of town) into Skyway The El Rey was about dead center of town with the bowling alley next door. The Pine Breeze drive-in was further up the Skyway, (maybe 2 miles). The El Rey operated during the winter-spring months, then the Pine Breeze opened for the summer months. The pic noted by Mr Vogel eventually got a free standing marquee directly in front, on street, it was there from my time, not sure when it was originally erected. It was a standard ‘2 sided’ reader board. JCL

My dad work for Fred in the fifty’s. He first started up the road at the drive-in. Then when summer ended they would close down the drive-in and open the El Ray. He worked For Fred for years.

My subscription to comments on this page got canceled when the site was redesigned a few years ago, so this is the first I’ve seen of the comments from JCL and Ian377.

The El Rey was gone by the time I first visited Paradise in the mid-1970s and had been replaced by the Pine Ridge Theatre on Foster Road, which is now a feed and pet supply store. The Drive-In was still there but had been converted into a swap meet (the remains have since been demolished and a health club has been built on the site.)

I’m not sure exactly where the old bowling alley on Skyway was. By the time I arrived the only bowling alley in town was on Clark Road north of Wagstaff, and that building is now gone (its roof collapsed after a heavy snowfall in the late 1980s) and the bowling alley has moved to a new building a few miles farther down Clark.

The old center of town runs from a short way south of Pearson Road northward to Elliott Road. I’m not sure if any of the buildings in that area could be the El Rey’s building remodeled beyond recognition or not. The chances that it is still standing are pretty slim, though.

The old El Rey Theater building was still standing when I was moved to Paradise in 1975 as a very youg boy. The El Rey was a run down vandalized hulk that had issues with kids and transients using it. A fire seriously damaged the building in 1976 and it was torn down. The site is now a Town of Paradise public parking lot that sits next to the boys and girls club which is in the old bowling alley building long since remodeled.

Thanks, Gpowers205. The Boys and Girls Club is at 6241 Skyway, and the next building south is at 6197, so the theater’s address would have been between those numbers- say approximately 6225. Google Maps' address approximation is way off, though, with readouts of 6180-6192 for the parking lot (which also serves as an extension of Fir Street between Skyway and Inez Way.)

The new theater at Paradise that was noted in this item from the May 24, 1924, issue of The Moving Picture World was probably the El Rey:

“A picture theatre has been opened at Paradise, Cal., by the J. B. Case Company, this being the first in the community. The equipment was furnished by Walter G. Preddey of San Francisco.”