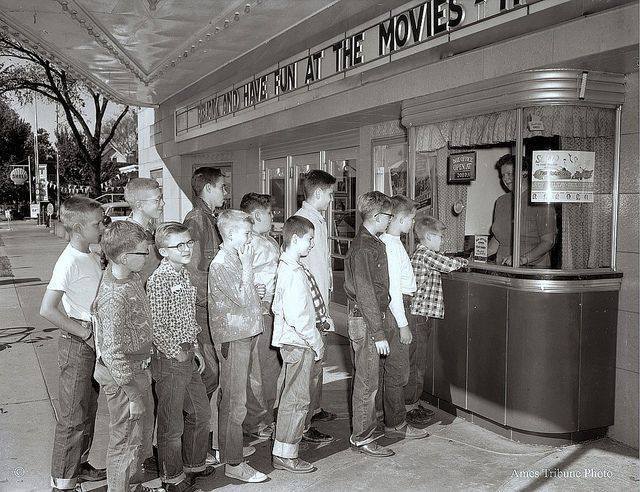 The American Theater opened December 29, 1919 with Cecil B. De Mille’s “Male and Female. It was located on the same block as the Varsity Theater in Ames, IA. It was taken over by A.H. Blank and it was renamed Ames Theater on September 19, 1920. It was still open in 1957. After closing the building was used by Kingsland Systems Inc. as an office training facility. It has since been demolished.

When the Ames Theatre was almost completely rebuilt in 1928, the architects for the project were Vorse, Kraetsch and Kraetsch of Des Moines. This, and much additional information, can be found on the web page to which ken mc linked in the comment immediately above.

The lead architect of the firm’s theater projects was Norman T. Vorse, who had designed theaters prior to merging his practice with that of the Kraetsch Brothers in 1919.

When it closed, it was originally purchased by the owner of People’s Bar & Grill with the intention of turning it into a larger live music venue. They made it quite a way into the conversion before they discovered that adding the required number of restrooms would involve tearing up Lincoln Way and adding larger utility feed and sewer lines. Sadly, this made the project cost prohibitive and it was scrapped.

The links for the before and after renovation photos are all dead. But I added a photo that appears to be before. The horizontal sign above the box office and marquee overhang appear to be the same.

The American Theatre opened in Campustown on December 29, 1919. Earlier that year, the City Council passed an ordinance that only permitted theaters downtown. University officials thought a movie theater near campus would distract students from their academic work. The ordinance was soon repealed and A.L. Champlin constructed the theater. It was the third one for Ames and the first built solely to show movies. Soon after its construction, Joe Gerbrach, who owned the two theaters downtown, acquired it and renamed it Ames Theater. The name was changed to New Ames Theater in 1928 after a remodeling project. The theater closed in 1996.