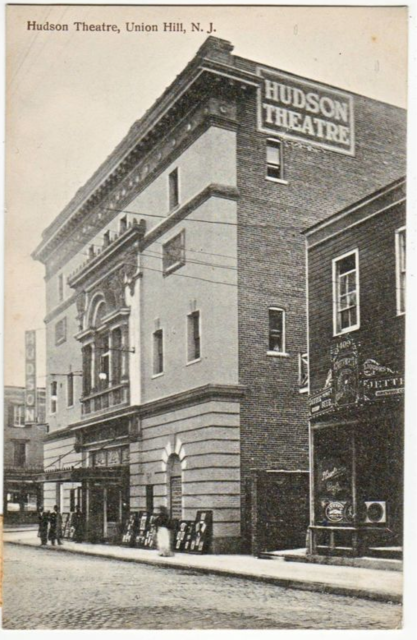 Built in what was then known as Union Hill. Union City was formed by the merger of West Hoboken and Union Hill on 6/1/1925. This theatre dates from at least December 1907 when Fred Astaire performed there in his Wedding Cake Act.

The theatre is listed as operating in the 1951 Film Daily Yearbook.

Any additional information on this theater would be greatly appreciated.

Hardly remember Sam Cohen, vaquely his brother. He probably gave us our pay each week. I do remember Jack Montgomery, always a gentleman. He hired me when I was still a teenager and typical of the era, quite innocent. I think I was just starstruck, as I lived in the movies as a kid.
I will look into the book. The showgirls wore what I would refer to as Bikinis with frills…and big hats. There was an abudance of material that went from the wasteline area out to the wrists. You walked with arms outstretched, shoulders down and placed your feet one in front of the other. This gave the gals a graceful, floating
motion across the stage.
Yes, I remember the Show Spot. At one time, so I was told, they had a ramp where the entertainers would prance out into the bar from the theater area.
You are stimulating my recall…thank you. Joankelsy

Anyone with any photos or stories on the Theater or any other photos or stories from Union City please contact me at We are soon to open a museum at the old Carnegie Library at 15th street and New York Ave. and want to preserve as much history is possible. Thanks Joe Botti

In 1954, audio pioneer Emory Cook recorded an album in binaural stereo at the Hudson Theater. It featured a complete burlesque performance including the lobby barker and comedy sketches. Segments can be heard on this site:

Students of comedy may recognize the voice of Joe DeRita in the sketches. Within a few years, he was a member of the 3 Stooges!

My mother owned a small apartment building on 38th Street in the next block. My gang and I used to hang outside the stage door on hot summer nights. The door was kept open because there was no air conditioning. The man who sat outside guarding the door used to try and chase us away, but then he got used to us. “Youse kids!” Sometimes he’d get a chocolate bar from the concession stand and give it to us. We could hear the audience laughing at the comedians,but we waited for the boom-chicka,boom-chicka which told us when the strippers were performing. I remember the busloads of servicemen from New York being dropped at the corner, especially the sailors in their white middies and caps. The display cases outside held posters describing the ‘sweet Georgia peach(es)'that were going to perform. The boys in our gang would prance around the sidewalk outside the stage door saying, “Hubba,hubba, ding, ding. Baby, you got everything. My mother had furnished apartments—this was right after the War when there was a housing shortage—and one of her tenants was a beautiful southern girl who sang at the Cardinal Club across the street from the Hudson. Her name was Dorothy—don’t know last name. Also, across the street from the Theater was the local newspaper, The Hudson Dispatch, where my mother placed her apartment ads. The Hudson was a big part of my childhood and I remember it fondly.

Does anyone know if Lili St.Cyr, Dawn O'Day, or Gypsy Rose Lee performed at the Hudson? I seem to remember their names, but I’m not sure. Thanks for info.

When we were teenagers, (Early 1950’s) we somehow were able to get into the Hudson Burlesque. It was a pure fantasy for us guys..we somehow made it up into those incredible balcony seats that made it seem like you were going to fall right out and off the top! We always had fun .. at 16 and 17 it was amazing to see the gals come out onstage with not so much on .. I loved the ‘comic’ babes that were always part of the chorus line .. there’d be about 8-10 girls that just did the normal routine of shaking it and dancing .. but the comic would do some outrageous stuff .. like purposely going the wrong way or she’d have some twirler tassels on the ends of her ‘pasties’ covering her nipples and she’d have a good set and would TWIRL those tassels just by waving her boobs in different directions .. causing a helluva a roar from the audience! Most times they’d have a featured comedian, like a Pinky Lee character to go along with the house clowns male & females. They would always have a routine of a guy hawking candy after pretending to put a watch or a $5 into one of the boxes and then they’d have ‘runners’ that would go up and down the aisles trying to sell the candy .. I think it was turkish taffy. I always got it and of course never got the watch! There would be a singer, he would perform in what might have been the last of vaudeville comedy skits/always with ‘double entendres’ about the gals anatomy or sex. But good clean fun. Then the guy would come out with a big fanfare first/taadahhhh introduction and with a spotlight shining only on him, do his big song for the night .. then the piece de resistance .. the showstopper babe for the night .. sometimes it was some gal(nice body) that nobody ever heard of .. but one night, I STILL remember at 73, TEMPEST STORM came out and everybody went nuts ..she KNEW WHO SHE WAS and let us all know it IMMEDIATELY .. she moved with such sexy grace and always kept her eyes glued on the audience and somehow she seemed to KNOW just when or how to make a MOVE that would drive eveyone bananas! GORGEOUS body and her breasts were probably the best shaped I’d ever seen. There was another time when Lili St. Cyr came out as well, she was another fabulous woman .. and she had another way of showing herself off .. it was mostly about her clothes ..and the way she removed each piece .. it was such a Slooooooooow tease ..and at the very last second, she’d take off the top and slip right behind the curtain at the edge of the stage. so you might have thought you saw IT .. but she never let it out! All in all the Hudson was a guys night out just to have good clean entertainment. No SEX acts performed ever! IT was not expected .. only to hopefully get to see a part of an anatomy that was TABOO .. and you’d only get a half a peek every once in awhile if you attended regularly. MOSTLY CANDY is all! and good music, I recall seeing someone who sure resembled Robert Alda singing there once; he got a terrific ovation, so I paid attention (who was this guy?)and later thought it had been Alan Alda’s dad all those years before. I went back as a 19 or 20 year old and the place was sadly closed down. FOND MEMORIES and FUN MEMORIES AS WELL. We tried to get into Minsky’s in NYC, but they just said “get outta here kids, ya boddering me!” and we did! There was another burlesque house in NJ, but for some reason, I can not recall it’s name .. sorry. It might be in some archives somewhere. The Hudson is very missed and the new generations have no idea how much good clean fun they missedwithout it.

I have found quite a few posters from the Hudson Burlesque on Pinterest. I grew up in Union City, and both nuns and parents warned the kids not to walk past the theater, which was considered a “near occasion of sin”. Of course, this made it even more fascinating to us.

A marker was recently erected at the site of the old Hudson to commemorate the theater and its history.

Does anyone know if Eugene Laird was the movie operator in 1920-30?