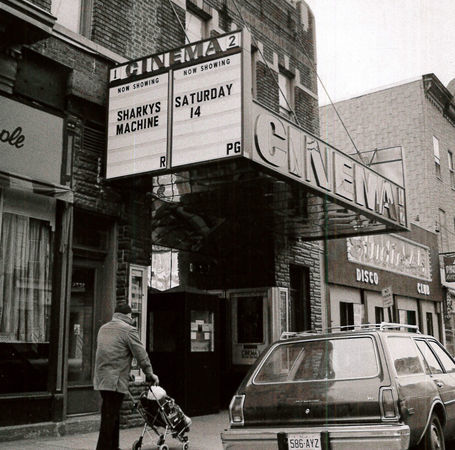 The Temple Theater was opened around 1926. Converted in 1980’s for triplex. Closed soon thereafter and converted to a small shopping mall.

Could be more, but the only two that I think were CINERAMA were the Clairidge in Montclair and the Bellevue in UPPER MONTCLAIR. On the other hand, not to make you feel bad, but at one time or another New York State had about 13 CINERAMA Theatres!

Listed as a 3 screen Brandt Theatre in the 1985 International Motion Picture Almanac.

Listed as a Brandt Theater in the 1976 International Motion Picture Almanac.

They just removed the old marquee in the last week.

Is this really demolished? It seems on Bing Maps that there is a theatre at that location.

Before it was called the Cinema Movie theater, it was called Temple Inn. It was next to a very fancy restaurant that I think was called Dick’s. What I remember best about the Cinema Theater was that it showed Double Feature B movies – never first run – and ticket prices were the lowest in Union City.

yes i used to go there, i can’t remember what year i last went but i payed about 3 bucks, for a double feature.