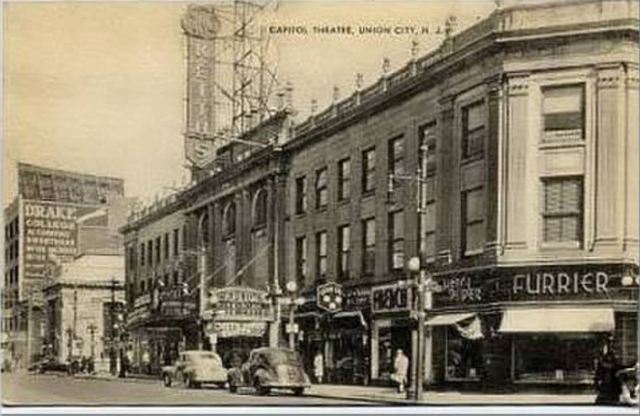 Single screen theatre with a balcony, which shared the same building as the RKO State Theatre, both built in 1922. By 1957 the Capitol Theatre was operated by Liggett-Florin Booking Service. The theatre was closed in the early-1960’s, and the front and north side were demolished in 1967-68, and turned into a supermarket. It is currently a Rite Aid store.

The RKO Capitol Theatre was located at 4700 Bergenline Ave. and it seated 2129 people.

In the new book “Theatres” by Craig Morrison, there is a drawing on page 132 of B.F. Keith’s Capitol Theatre, 4700 Bergenline Ave, Union City NJ. 2,129 seats. The drawing was made in 1924 by Anthony Dumas of New York City. The Capitol was on the right side of a long structure. On the left side was another theatre, B.F. Keith’s State Theatre, which had 1,794 seats. On the roof in the center of the building is a small sign “Twin Theater”. What is unique is that these two theatres, under the same management, shared one entrance. You went inside and turned left for the State and right for the Capitol. If there was only one ticket office inside, then this would be an early example of a Twin Cinema. There does not seem to be a Page here in Cinema Treasures for the State Theatre in Union City, only the Capitol Theatre.

In Time Life’s book “This Fabulous Century 1920-1930”, there is a picture on page 244 of “Shipwreck” Kelly sitting on top of a flagpole on top of BF Keith’s theatre in Union City. Must have been quite a fad back then…

Does anyone know what happened to the Tony Theatre on Bergenline? Is it still open? I was trying to find it on CT, but couldn’t find it under Union City, NJ.

A brief article about theater promoter Frank G. Hall in the April 22, 1922, issue of The Moving Picture World (scan at Archive.org) says that construction had begun on the State-Capitol twin theater project in Union City, New Jersey. Hall’s earlier project, the State Theatre at Jersey City, was then nearing completion.