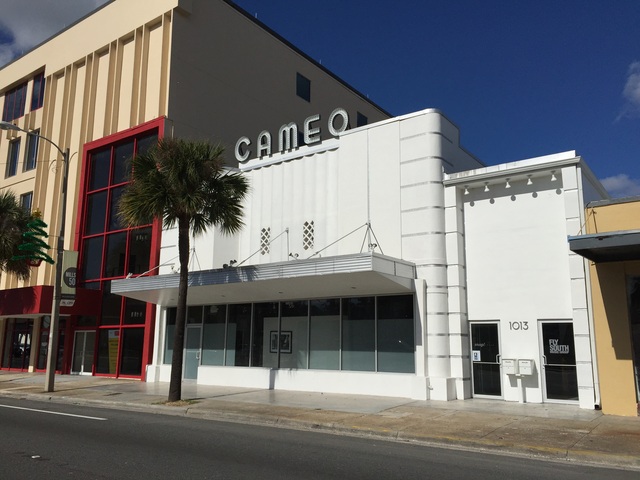 The Cameo Theatre opened on Christmas Day, 1940. It was a latecomer in Orlando’s theatres, and was located just a block west of the Vogue Theatre. Open for only a few years (maybe less than five), the Cameo Theatre sat abandoned for years, save for an occasional booking by a evangelical group. The building was remodeled and occupied for years by IBM. Since then it has had many occupants, and has often been vacant. The marquee still stands.

The July 5, 1941, issue of Boxoffice mentioned the Cameo as one of several theaters opened in recent months by the Florida State Circuit.

The January 18, 1947, issue of Boxoffice ran this item datelined Orlando: “The Cameo Theatre in Colonialtown, closed during the war years, has been reopened. The theatre is booked to show return engagements.”

Those are the only mentions of the Cameo I’ve been able to find in Boxoffice.

Thank you for digging up some history I hadn’t located, Joe. Does anyone else know additional information about the Cameo?

The Cameo is open but not with The Greater Orlando Actors Theatre. They were using the space not running it. There are many users of the space including live music, comedy, theater, dance, art openings or just plain birthday parties. They are currently working with the space and trying to grow it again. True direction unknown. Currently including: MegaloMusic www.myspace.com/megalomusicevents ( a live music production company) which has shows many weekend nights a month, Hump Day Humor a comedy act on Wed. nights. Many events happen here every month including upcoming “Vibe” event (this weekend) and ELLA Music Fest Oct. 1-4 www.ellamusicfest.org
There is a Downtown revitalization by the city in this area spear headed by Mills 50. www.mills50.org
The Cameo Theater current active website www.thecameo.org

Here is my picture from November 2011. The building is currently on the market.

Does anyone have a picture of the Cameo back in the day??

The Cameo was racially segregated as were all of the other movie theaters in Orlando until a year or two before the Civil Rights Act of 1964 was passed.

Please see the photo section for newly surfaced photos of the Cameo and a special advertising section welcoming the new theatre. The Cameo opened on November 27, 1940, with the film ROAD TO SINGAPORE. Today, the new owner of the Cameo building wants to restore the façade to a close re-creation of what used to be.

The Cameo’s building has undergone an extensive renovation and is now occupied by “SNAP,” a photo gallery.

The Cameo’s light bulb lit sign has been replicated and is mounted on top of the building. This project was a joint effort by Jorge Boone, the building’s owner, and the Orlando City Council. See photos section on this page.