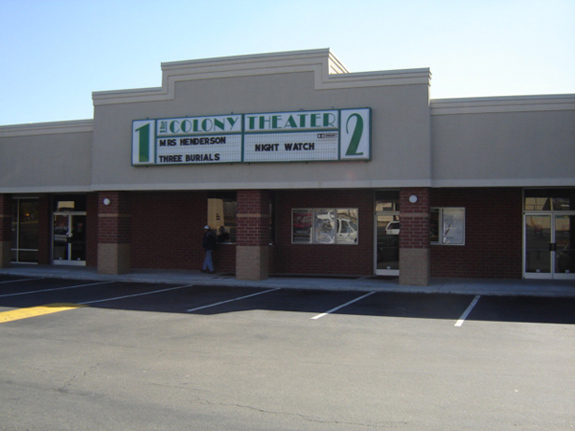 Located in the Colony shopping center. Opened December 29, 1972 as the Six Forks Cinema under the Jerry Lewis Cinemas franchise. It was a single screen theatre with 360 seats. It was twinned on March 2, 1973 and renamed Terrace Twin on August 5, 1977. It was renamed Colony Theater on April 1, 1994 and was last operated as an art house cinema by Ambassador Entertainment who closed it on December 17, 2015.

It was My father Harry Kellam who opened the single-screen Six Forks Cinema in 1972. It was never a Jerry Lewis Cinema. There was a competing franchise chain (even less successful than the Lewis chain) that included as celebrity backers Glenn Ford and Andy Devine. My Dad invested in that now forgotten company, obtained the franchise, designed the original theater (the concept was that these theaters would fit into existing shopping mall/strip mall store spaces), all before the national franchise went bankrupt. With that backing and support gone, Harry Kellam went ahead and opened the theater to show G and PG movies. Ooops.

Two things moved him out of the business: 1) audiences weren’t very interested in “family” entertainment, and 2) Dad realized that he’d wind up being at the cinema every day, 7 days a week, 365/year, cleaning bathrooms, and walking what receipts there were to the bank in the dark. He leased the placed out until he could sell it. (Well, there was also a projectionist who wasn’t always sober enough to run the equipment, but that’s another story.)

If this was never a Jerry Lewis franchise then that company never entered North Carolina. The only mini-cinema chain in North Carolina I am aware of was the Trans-Lux Inflight Cine' chain, which built its first NC location in Kinston (originally single-screen, it is listed on CT as Plaza Cinema Twin). Others followed in Kannapolis, Charlotte, Burlington, Greensboro and High Point. The dedicated mini-cinema chains such as Jerry Lewis, Trans-Lux Inflight Cine' and whatever company the Six Forks Cinema was to affiliate with were on the ropes by 1972, as the established chains started building mini-twins of their own. The fact that this cinema ever opened, let alone is still operating as a cinema over forty years later, is amazing. Most other mini-cinemas from the late 1960s-early 1970s closed down decades ago when the multiplexes crowded them out; many mini-cinemas (including all NC Trans-Lux Inflight Cine’s except Kinston) became porn theaters at some point in their existence. The Six Forks Cinema/Terrace Twin/Colony Twin never to my knowledge operated as a pornhouse, although some X-rated films may have been shown there.

Correction, NightHawk1. Jerry Lewis Cinemas had one location in Siler City, NC. Seems like I ran across a few other locations over the years. One other such franchise was Chris McGuire theatres which originally opens Southgate in Thomasville. You are correct that most of these were losers and closed rather quickly.

Shagndj: For your information there was NEVER a Jerry Lewis Cinema located in Siler City, NC. The only operating movie theater at that time was the Siler City Drive-In right off Highway 64.

This theater is permanently closed. The last day of business was on December 17, 2015.

There were at least two Jerry Lewis theatres in NC: Siler City and Mt Airy. Siler City opened in Oct 71. Hollywood Reporter of 10-28-71 reported “a 350 seat Jerry Lewis Cinema opened Friday in the Park Shopping Center in Siler City [they misspelled it Silver] NC. Area Director is Mini Theatres of Raleigh, the franchise owner-operator is C & L Development Co.” Earlier, the Siler City-Chatham News had a photo of the construction in its 9-16-71 edition. The caption said this would be the first indoor theatre the city had had in almost 10 years, after the fire that destroyed the Elder Theatre. Said the Siler City location was “one of the first of the chain in North Carolina.”

The Mount Airy News of 10-1-71 said that JBJ Enterprises Inc is constructing a theatre on “US 52 Bypass, adjacent to the City View Motel. The structure is tentatively scheduled to open by Jan. 1. Seating to be 350, a parking lot for 130 cars.” JBJ “is headed by Joe Johnson Sr. and Joe Keyes. The property is being developed to their specifications by E.D. Bray Jr. and Gary Pruett. Jerome Samet of Mount Airy is contractor for the construction work.” It went on to say the operators were going to have a 15-year lease and this would be the 4th theatre in the area, with 1 hardtop and 2 drive ins currently operating.

Neither of these have a listing on Cinema Treasures under their respective cities.

Re the ‘other’ chains. The Glenn Ford one was with Agnes Moorhead and Debbie Reynolds – have not seen Andy Devine mentioned with this but it’s possible he was an investor.

This reopened as the Terrace on March 2nd, 1973, the same day as the Mission Valley cinema’s opening. Grand opening ad posted.

The Terrace Cinema 2 opened on August 5th, 1977 By Bill Rawls Theatres with “General MacArthur” with a Dolby stereo system. Another ad posted.