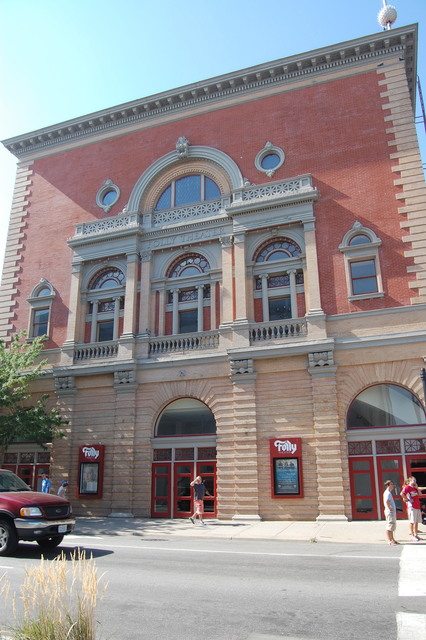 The Folly Theater at 12th and Central was built in 1900 as the Standard Theater. Designed by the prominent Kansas City architect Louis S. Curtiss, it is an important example of turn-of-the-century architecture in the downtown area. Later, it emerged as a fine example of historic preservation achieved by the efforts of local organizations with local, state, federal government assistance.

Along with the adjoining Edward Hotel (also designed by Curtiss, razed in 1965), the theater was the center of what would eventually become the city’s theater district, comprised of 14 legitimate theaters. The Edward Hotel was a meeting place for actors, producers, newspapermen, and other persons associated with the theater industry. Ernie Burnett composed the classic song “Melancholy Baby” at the hotel’s grill. Curtiss designed the theater as a spectacle of lights, incorporating light bulbs along the outside facade and cornices, making the exterior as theatrical as the interior. Additionally, a giant, lighted ball was affixed to a pole on the theater’s roof, and it descended the pole and remained illuminated while the theater was in use. The theater was also distinguished by the design motifs on the southern facade and a triple-arch window inspired by Andrea Palladio, a 16th-century Italian sculptor and architect. Curtiss used galvanized iron and zinc ornamentation to embellish the light-colored pressed-brick facade. Inside the building, pastels, delicate plasterwork, and magnificent chandeliers continued the elegance established by the exterior. The arched Palladian window on the main facade is reminiscent of graceful loggia of the Venetian Bascilica, designed by Palladio.

The Standard Theater opened on September 23, 1900. It had been commissioned by Edward Butler, a prominent businessman and politician from Saint Louis who wanted to expand beyond his blacksmith and mining operations with a national chain of theaters. The first show was “The Jolly Grass Widow”, a “polite burlesque” starring Madame Diks. Indeed, the theater became known for burlesque, vaudeville, and comedy performances. The square proscenium was 33ft wide and the stage 35ft deep. When the Coates Opera House burned on January 31, 1901, performances scheduled for that house were moved to the Standard Theater.

Renamed the Century Theater in 1902, the first decade of the theater’s operation saw such famous performers as Maude Adams, Richard Mansfield, Sarah Bernhardt, Al Jolson, Fannie Brice, Eddie Foy, and the Marx Brothers. From 1900 through 1922, Joe Donegan managed the theater and hotel, and he scheduled special events to be held after the regular performances on Saturday evenings–usually prize fights and wrestling. Such greats as Jack Dempsey, Jack Johnson, and Harry the Great appeared there. At one time Frank James, brother of Jesse, was a ticket taker.

After a fire destroyed much of the theater' upper balcony in May of 1920, the Shubert brothers bought the building and completed a $25,000 renovation. It reopened in 1923 as Shubert’s Missouri Theater. Under their ownership, the theater presented classical drama, including works by Shakespeare and Eugene O'Neill. For the next decade, the theater struggled to say alive, remaining open only intermittently toward the end of this period. Amid huge bills, dwindling attendance, and the onslaught of the Great Depression, the owners closed the doors in 1932. In 1941, Barney Allis, owner of the Muehlebach Hotel, bought the theater and reopened it as the Folly Theater. Seating was provided for 1,000 in the orchestra level and 1,000 in the balcony.

An effort was made to return the theater to the days of vaudeville, but it soon became known for its burlesque shows and X-rated motion pictures. Performers during this time included Gypsy Rose Lee, Tempest Storm, Rose La Rose, Peaches Browning, and Miss Chesty Gabor. By 1970 the theater was in a steep decline, was not being maintained to any large degree, and was suffering from plummeting attendance. Three years later when it closed in 1973, bids were taken for its demolition. During this same time, concerned citizens, led by Joan Dillon, formed the Performing Arts Foundation, whose goal was the preservation of the Folly Theater–the last, legitimate, turn-of-the-century theater in Kansas City. The Foundation acquired the property from its New York owners for $500,000, and, in 1974, the building was listed on the National Register of Historic Places. Money was solicited and received from a wide range of sources: part of a $1 million Urban Development Grant from the Housing and Urban Development Department; $25,000 from the Junior League of Kansas City for the restoration of the Palladian windows; and $250,000 from both Kansas City Southern Industries and Hallmark, funds that were matched by the Missouri State Office of Historic Preservation. The architectural firm of Patty Berkebile Nelson Associates was hired for the renovation of the auditorium and the support wing (originally dressing rooms).

By the time remodeling began, local birds had succeeded in making their presence readily apparent: nine tons of pigeon and other droppings were hauled away. When the theater opened in 1981, architect Bob Berkebile placed a pair of plaster pigeons above the box office, naming them Joan and George, after the Dillons, who were so instrumental in saving the theater. The first performance in the revitalized Folly Theater, in November of 1981, was a show entitled “Room Service”, a musical revue by musician Carole King. Broadcaster Walter Cronkite was in attendance opening night, along with a host of local dignitaries and preservation activists. The Folly Theater continues to host a variety of performing artists and other fine arts activities, and the theater is slated for additional interior renovations sometime in the near future. Written by Donna Francis

Tour of Missouri, Oklahoma and Kansas Theatres in 2004
From June 26 through July 1, 2004 the Theatre Historical Society of America will tour a number of theatres in Kansas City Missouri and surrounding areas, including theatres in Lamar, Joplin, Richmond, St. Joseph and Springfield, MO, as well as Miami, OK, and these cities in Kansas: Leavenworth, Kansas City, Emporia, El Dorado, Augusta, Wichita, Hutchinson, McPherson, Salina, Concordia, and Topeka. More information is contained on their web site: http://www.HistoricTheatres.org and special photos and information concerning the Kansas City theatres: UPTOWN and the MIDLAND is available on this temporary page of their site at: http://www2.hawaii.edu/~angell/thsa/fromarch.html A glossy brochure about this “Heart of America” Conclave is available from the Society’s headquarters listed on their homepage, via E-mail to the Ex. Director, or via snail mail. Membership in the Society is not required to attend the Conclave and tour the theatres, but fees do apply as detailed on their site. Bring your camera and lots of film, for it is usually difficult or impossible to enter these theatres for photos, and some of them will surely not be with us in the years to come.

The Folly was originally called the Standard, changed to the Century & finally the Folly.

Here is a link to more info on the folly & an old postcard from it’s days as the Century:
View link

The Folly Theater Web site (a link is provided above) also shows many current color photos of the interior of this theater.