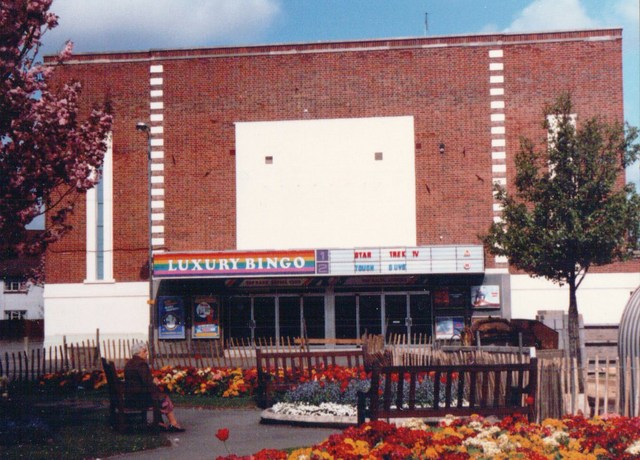 Opened and built for the Union Cinemas Circuit as the Ritz Cinema on 29th March 1937, the original seating capacity was for 959. In October 1937 it was taken over by Associated British Cinemas (ABC).

The Ritz Cinema was closed by ABC on 13th July 1963 and was converted into a bingo hall, but after the town’s other cinema-the Picture Playhouse-closed down in the early-1970’s, leaving the town with no cinema, it was decided to convert the balcony of the Ritz Cinema into two small cinemas seating 150 and 90 seats.

It re-opened as the Ladbroke’s Film Centre 1 & 2 in 1974 with bingo continuing in the former stalls area. It was taken over by the Rank Organisation in c.1987 and became the Top Rank Cinemas with Top Rank Bingo remaining.

Since the mid-1990’s it has been operated as an independent and re-named the Palace Cinema. In 2002 plans were proposed to convert the building into a single screen cinema, retain the bingo hall and build a casino, restaurant and a 57 bed hotel, but these met with local opposition. It suffered a small fire while renovations were being carried out in late-2004 and that closed the building temporarily. A re-opening was planned for mid-August 2005 but that was slightly delayed and the refurbished Palace Cinema had re-opened by June 2007.

A 2003 exterior photograph of the Palace Cinema here:
View link

Another exterior photo dating from 2006 here :

This cinema has just had digital projection and sound added to both screens with Dolby 3D added to screen 1. The screens and seats were up graded 2 years ago.