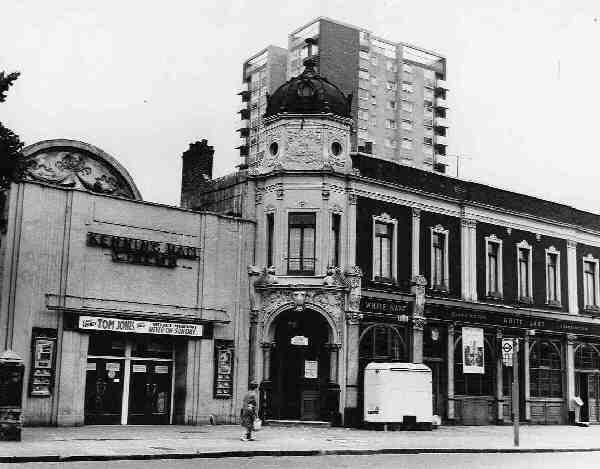 Located in the Clapton district of east London. In around 1896 a hall was built next to the White Hart public house to be used as an assembly/function room for the the pub. It had an ornate façade to match the decoration on the pub and elaborately decorated plaster decorations on the beams of the barrel vaulted ceiling of the auditorium.

In 1910 the hall was converted into a cinema, known as the Clapton Cinematograph Theatre and was designed by Wood Green based architect George D. Duckworth. It opened on 16th December 1910, and had 850 seats all on one floor (with no balcony). The Independent owners; Clapton Cinematograph Theatre Co. decided to give the cinema a new name from 1919 and re-named it the Kenninghall Kinema after the nearby Kenninghall Road. The seating capacity was reduced to 700.

From 28th April 1938 the cinema was taken over by the ever expanding Oscar Deutsch operated; Odeon Theatres Ltd. circuit and a new modern Art Deco style façade and foyer was added to the building, designed by architect George Coles. This take-over was with a view to eventually demolish the Kenninghall Kinema and build a modern Odeon Theatre on the expanded site of the cinema and the adjacent pub. The seating capacity was further reduced to 641 and the name was changed to Kenning Hall Cinema. Due to World War II the redevelopment never happened and the Kenning Hall Cinema soldiered on, remaining one of the Odeon circuit’s lesser cinemas (Associated British Cinemas-ABC had got in a little earlier in October 1939 and built their 1,884 seat Ritz Cinema almost next door).

The Kenning Hall Cinema was leased out to an Independent operator D. Mistlin from 2nd March 1958 and it closed in June 1979. It lay empty and unused for a while until 1983 when it was converted into a nightclub called ‘Duggies’. It has had a couple of name changes in recent years; Elite Nightclub and later called the Palace Pavilion. A small part of the original decorative façade is still to be seen peeking above the ‘newer’ 1938 frontage, although it has been painted black to disguise it. The White Hart pub building still survives, but has been closed down for several years after shootings and drug related crime which has also affected the nightclub, and that has now been closed down in April 2006. The White Hart pub re-opened in 2015.

The former cinema building stood unused, but there was a local community group formed in December 2006: The Friends of Clapton Cinematograph Theatre, who hoped to regenerate interest to re-opened the building as a community cinema and art workshop. Sadly this never happened and the building was sold in 2011 and work began to convert it into a Muslim Community Centre. By June 2021, conversion appears to have been halted.

In the 1960s the Kenning Hall was one of those cinemas you visited to see obscure horror films and revivals of older pictures. On a visit to this quaint little hall one really cold and snowy winter’s day in the 1960s, I was puzzled to see the handful of patrons huddled in little groups next to the walls. The reason soon became apparent – they were desparately trying to get some warmth from the half dozen radiators, which were totally inadequate to heat a building of even that modest size. I was a fanatical film fan and would travel all over London to catch a rare movie, but the cold defeated me and I had to walk out before contracting frostbite in my toes – the first, and last, time I have ever done such a thing.

After yet another fatal shooting incident at the Palace Pavilion Nightclub, the licence has been revoked and the building closed down in April 2006. Plans are being proposed to demolish the building and adjacent White Hart pub and build housing on the site. Both the local Hackney Historical Society and the Cinema Theatre Association are opposed to these plans, as the building is historic as an early cinema and contains original decorative details within the auditorium.

Photographed in July 1983 when it had just opened as Duggies Nightclub:
View link