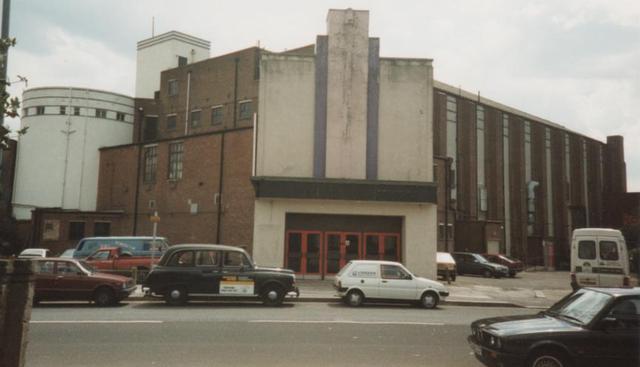 Opened as the State Cinema by independent operator Cumberland Cinemas Ltd. in October 1938. It was advertised as the District’s Newest Theatre ‘A Cathedral of Motion Picture Arts’ and had two entrances, the main one on Fairlop Road and another on Fullwell Avenue and seating was provided in stalls and balcony levels. There was a luxurious café/ballroom and two car-parks for the use of patrons. Designed by noted cinema architect George Coles, it had clean sweeping corners and troughs of concealed lighting, typical of a large suburban cinema being built in the U.K. at that time.

By 1940, it had been taken over by Kessex Cinemas, owned by the Kay Brothers who were a large Independent circuit operating several huge cinemas in the local area. Sadly in October 1940 it suffered some bomb damage and was closed down and requisitioned by the Government War Office to be used as a store house for the remainder of the war.

In September 1947 it was taken over by Associated British Cinemas (ABC) chain who repaired and refurbished it to re-open as the ABC State on 16th February 1948, but without its café/ballroom which remained closed up and un-used. In 1964 it became the ABC Barkingside and continued as a single screen operation until it was closed on 19th August 1972 to be converted into a twin cinema/bingo operation. The 626 seat ABC Cinema opened in the former balcony area on 23rd November 1972 using the main entrance in Fairlop Road. The former stalls area went over to bingo club use and was operated by Star Cinemas (bingo division) using the secondary entrance in Fullwell Avenue. ABC closed the cinema on 4th December 1976 with Christina Lindberg in the ‘banned’ Swedish film “Exposed” and “Sex Rally”, but bingo remained open downstairs.

The cinema section was re-opened as the independently operated Ace-State Cinema on 17th September 1978 and a second (video) screen seating 159 opened in the former cafe/ballroom area on 15th May 1982.

The State-Ace Cinema closed down on 30th August 1984 with “Star Trek III” in the main screen and “BMX Bandits” showing in the video screen. This section of the building has been mothballed and unused ever since.

Bingo remains open in the former stalls area, now using the main entrance in Fairlop Road, operated by Gala Bingo and from June 2018 re-named Buzz Bingo Club. It has a false ceiling installed forward from under the former balcony to the proscenium and stage, so there is no sign of the original Art Deco/Art Moderne original decorations visible to be seen, although it must still all be up there.

Here are two views of the former State Cinema as seen in the Summer of 1994:
Front main entrance on Fairlop Road, in use as a bingo hall (same use in 2006:
http://flickr.com/photos/kencta/138412375/
The secondary entrance on Fullwell Avenue which served as the former balcony cinema operation when the building was ‘twinned’ for cine/bingo. Seen here after 10 years of closure (today in 2006) it is all boarded up:
http://flickr.com/photos/kencta/138412826/

This set of photographs includes an article on the February 1948 re-opening, and has photographs of the interior:
View link

This was my local cinema, so I must correct the info given in the article. After the Cine-Bingo split, the cinema entrance was the main Fairlop Road side. The bingo club used the Fulwell Avenue entrance. This continued during the Ace era and it was only after final closure as a cinema that bingo took over the Fairlop Road entrance.

This was my local cinema and I can remember going to see All Creatures Great And Small back in the mid 70’s.

Well done to you Ken Roe, nice to see what the interior was like.