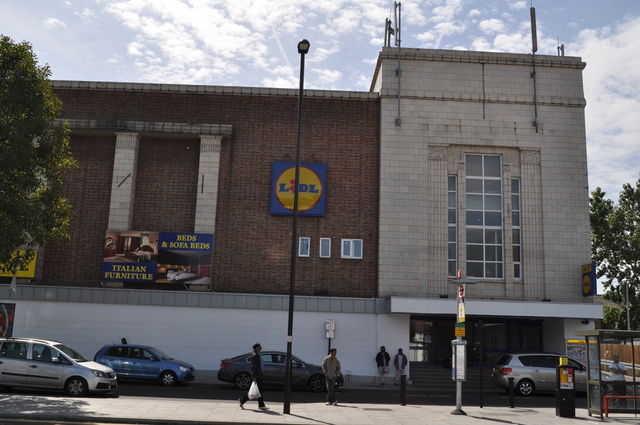 Located in Southall, Middlesex, to the west of what is now part of Greater London. Built as one of the original Oscar Deutsch chain of Odeon Theatres, it opened on 17th August 1936 with Douglas Fairbanks, Jr. in “The Amateur Gentleman”.

Architect George Coles (who also designed the Chinese styled Palace Cinema around the corner) opted for a modern Art Deco style for the Odeon. The auditorium lay parallel to the road from which the building was set back slightly. The main entrance block was clad in cream faiance tiles and was relieved by a large window over the canopy. Inside the auditorium, seating was provided for 1,122 in the stalls and 458 in the balcony. Illumination was by a series of stepped troughs which held concealed lighting.

The Odeon closed on 25th February 1961 with Jack Lemmon in “The Wackiest Ship in the Army” and Phillip Carey in “The Trunk”. It was reconstructed internally with the stalls floor being leveled and the balcony extended forward to the proscenium arch. It re-opened as a Top Rank Bowl on 14th August 1961. The 10 pin bowling craze did not last long and soon the building became vacant and unusued.

It was sold to the MFI furniture store company in July 1970 and converted into one of their stores. In recent years (from at least 1996) it has become a Queenstyle Carpet Centre store, and the former stalls level is now in use as a Lidl Supermarket.

cjc; No it’s not Listed and there is practically nothing remaining of the interior decoration apart from a few fragments of ceiling detail in what would have been the rear balcony area. Everything else was stripped out when it became a Top Rank Bowl.

I visited the old cinema this weekend, looking for a new sofa – it’s now a Queenstyle furniture and bedding store. From the old stalls, now the furniture area, you can still see where the original circle was. The extra floor has been added at a level which appears to coincide with where the top of the front of the balcony must have been, and extends right to the far wall. It is of concrete construction, and is supported by several very large-looking RSJ’s.

Upstairs, the previously raked circle has also been levelled from where the back row of seats would have been, and the new floor is accessed via two sets of steps. The projection box is now an office. The portholes have been enlarged, but the unusually curved rear wall remains.

My stepfather who frequently attended this cinema remembers that the screen viewed from the stalls was far too high and made viewing a film uncomfortable.The favoured cimemas in Southall were the Palace and Dominion.

There have been great changes during 2008, as the former stalls are now occupied by a Lidl Supermarket. The furniture store has remained in the old circle.

The projectors we had in this cinema were BTH Supers. Very smooth and reliable. Very good presentation from a very strict chief Tommy Lever.