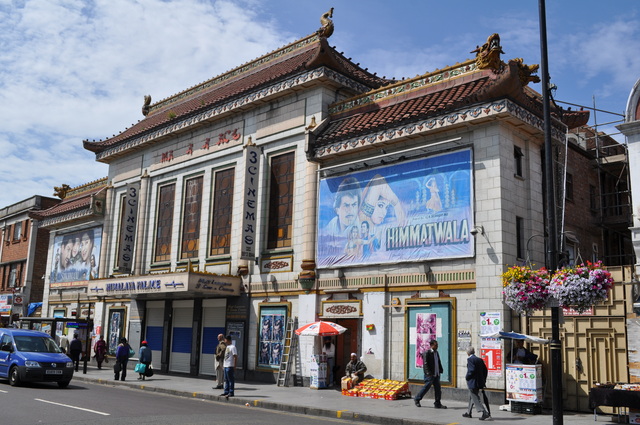 Located in Southall, Middlesex, which today is a district in the west of Greater London. Originally on this site was the Paragon Palace Cinema which opened around January 1912. It was taken over by the small United Picture Theatres Ltd. chain in around 1928, with the view to demolish it and build a brand new cinema.

Architect George Coles was appointed the circuit’s architect and UPT gave him the commission to design the first new cinema for the circuit (all the other cinemas were takeovers of older cinemas and theatres). The Palace Cinema was built in 1929 on an enlarged site of the former Paragon Palace Cinema, and it opened on 30th November 1929. Unfortunately, UPT overstretched their finances and the company were taken over by the Gaumont British Theatres Ltd. chain in April 1930 and they operated the Palace Cinema from July 1930.

The cinema’s style in the form of a Chinese temple is unique in Britain. Its exotic tiled exterior with a red pagoda roof complete with dragons have long made the cinema a well-loved local landmark. Inside the building, the Chinese style continues, but a little more restrained. There is a foyer just inside the entrance doors, which has a width almost as wide as the cinema, but with very little depth. Above the foyer is the projection box, toilets, staff rooms and managers office.

Seating in the auditorium was in a stadium plan, with a raised stepped circle section at the rear which did not overhang the lower stalls seating area. The decorative work included moulded pagoda roofs over two large panels which were set in the side-walls about mid-way back. Several large Chinese lantern style light fixtures hung from the ceiling which was plain in the centre, but had a row of large panels around the edges that were divided by decorated ribbed plasterwork. Each of the top corners of the rectangular proscenium arch had a dragon’s head facing each other. The colour scheme was red with gold highlights.

The Palace Cinema was equipped with a Compton 2Manual/6Ranks organ which had all the pipes in one chamber and was opened by Henry Wingfield. The proscenium was 50 feet wide and the stage was 15 feet deep which allowed for occasional variety shows to be performed in the early days.

The Palace Cinema has had several names over the years: on 13th March 1950 it was re-named Gaumont Southall. On 10th December 1961 it was re-named Odeon Southall, just a few months after the original Odeon around the corner closed to become a bowling alley. It was closed by the Rank Organisation on 26th June 1971 with Marie Liljedahl in “Do You Want Remain a Virgin Forever” and the Malcolm Leigh documentary “Legend of the Witches”.

The cinema was leased to an independent exhibitor who specialised in Indian ‘Bollywood’ films and from 28th June 1971 it was known as the Godeon Cinema, then on 29th November 1971 the Godina Cinema. It became the Liberty Cinema from 1st May 1972 still screening ‘Bollywood’ films. The Liberty Cinema closed in 1982 and after a period of time unused, it was converted into an indoor market. A false ceiling was suspended in the auditorium and the side walls were boarded over, becoming the rear of the market stalls down the sides of the auditorium.

In June 1998, plans were proposed to close the market and re-open the cinema again. This did not go down well with the stall holders, and in July 1998, a fire began which damaged the market stalls within, but did not take hold on the building, thanks to prompt action by London Fire Brigade.

In 1999, work began on a restoration of the cinema, in consultation with English Heritage who had designated the Palace Cinema a Grade II Listed building in 1980. Paint samples were taken to ensure the correct colours were re-created. The original 2,000 seat auditorium was sub-divided into three screens. The former raised rear circle section is now two small screens on each side, with seating for 148 in each screen. The original main stalls floor is a large main screen seating 461 and has a raised stepped circle (the original centre section of the former raised circle area), which has luxury seating for 50 patrons. Projection for all three screens is from the original projection box.

It re-opened as the Himalaya Palace Cinema on 14th September 2001 following a 5 million Pounds, four years restoration. The Indian High Commissioner was present to declare the cinema open. It presents first run ‘Bollywood’ films and occasional independent and mainstream films, in this area of London which today has a mainly Indian/Pakistani/Asian population.

Sadly, the Himalaya Palace Cinema was closed in March 2010, and was converted back into an indoor market.

Three exterior views taken over the years:
1. As the Palace Cinema playing the Gaumont release in 1949:
View link

Himalaya Palace cinema is closed and up for sale !
the front of the building is all boarded up

Details for company looking after the Building now

This is TRULY tragic, though I can’t say I’m surprised. Unfortunately, buildings in Southall tend to be renovated to a high standard, having masses of money thrown at them, but then allowed to fall into disrepair. When the conversion was undertaken in 2000, a Holly/Bolly mixture of programming was promised, that being one of the main criteria for English Heritage’s involvement. Quite understandably, given the demographic, this never happened, and the closest cinema for Hounslow area residents remains ‘Cineworld – The Movies’ in Feltham.

I drove past the Himalaya Palace yesterday, and even the boarding that was in situ LAST week has been boarded over, so presumably vandals have been at the place already. Oddly enough for a closed/boarded theatre, all the signage is still in place.

We had Gaumont Kalle 21 projectors in this cinema. Along with Westrex sound system in 1960. My chief was Freddy Montieth.

Renamed the Coronet, the exterior features near the start of Eyewitness (1956). The heroine goes there after argument with her husband, managing to bypass large queues when buying her ticket. She witnesses a robbery in the manager’s office and is pursued by one of the villains. During the chase she’s knocked down by a bus in front of the cinema – a very large poster for “The Rose Tattoo” (1955) can be seen on the cinema wall. The film actually being shown is a singing western entitled “The Desperados” (a non-existent film – may be an oblique reference to the robbers?). The box office looks genuine, but the rest of the cinema interiors are studio sets. The external fire escape down which heroine is chased looks real. THe manager’s office has a seating indicator propped against the wall.