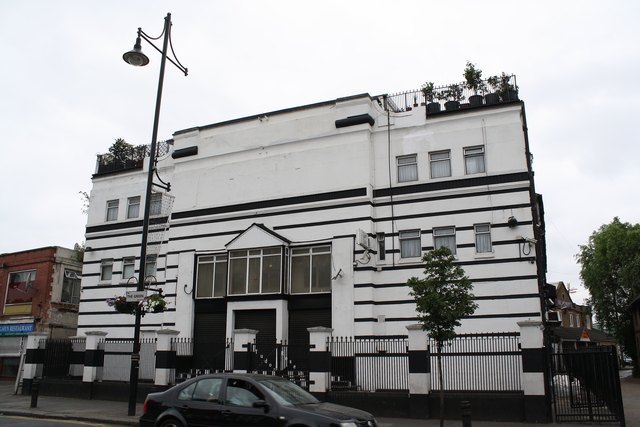 Built south of the railway station away from the main heart of Southall, Middlesex, in the west of Greater London. This opened in 1910 as the Southall Electric Theatre, and by December 1911 it had been re-named Gem Cinema. Seating was provided for 500. It was rebuilt in 1929 when a balcony was added, giving a seating capacity of 758.

It became the Century Cinema from 14th March 1955 only to close on 17th August 1957 with James Stewart in “The Man From Laramie” and John Lund in “Battle Stations”. It seems that it was never equipped to screen CinemaScope films.

After a short period as a warehouse it re-opened as the Century Cinema playing Bollywood films, the first cinema in Southall to cater for the Asian community of the area. The Century Cinema closed in 1980. It is now the Tudor Rose, a black Carribean bar and nightclub.

Little altered externally, the building is quite plain but internally nothing remains of the decor at stalls level which is now a live music area using the original stage, the upper part of the building is now conference suites and offices. In January 2020, plans were proposed to demolish the building and redevelop the site for housing.

This cinema was known as the local flea pit. I say that but it had the most fantastic magnetic sound that any other cinema had in Southall. I remeber seeing “White Feather” here in the 50s and hearing every sound from Robert Wagner saddle and stirups.