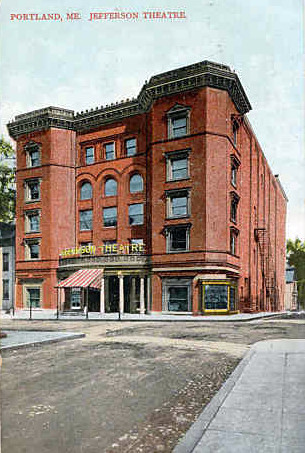 The Jefferson Theatre opened in September 1897 on Free Street at Oak Street. The theatre presented legitimate theatre and vaudeville. Among those to appear onstage at the Jefferson Theatre in the early years of the 20th century included Sarah Bernhardt, Marie Dressler, Lillian Russell, and Maine native Maxine Elliott.

In its later years, the Jefferson Theatre was used as a movie theatre and a burlesque house. It closed in 1933 and has since been razed. Any further information on this theatre would be appreciated.

Here is an undated photo:
http://tinyurl.com/q8qjs

Some additional information about the Jefferson on Google books:
http://tinyurl.com/mf8bpa