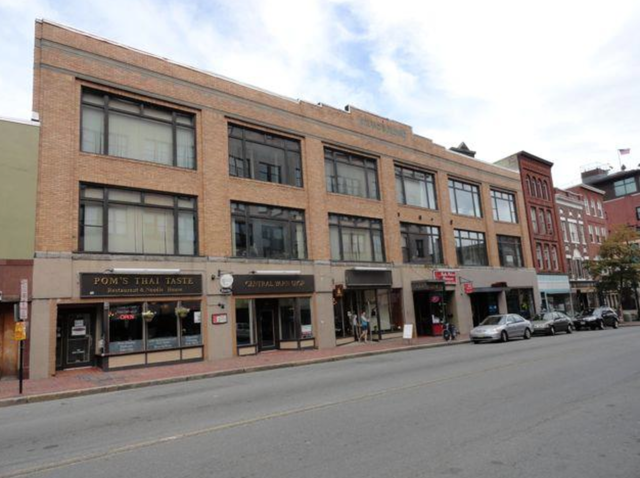 The Big Nickel Theatre was opened April 3, 1911. In 1915 it was renamed Strand Theatre. The building was closed and gutted in 1917, and rebuilt to the designs of noted architect Thomas W. Lamb, reopening as the Strand Theatre June 3, 1918. A Wurlitzer theatre organ Opus 1778, Style 260SP was shipped to the Strand Theatre on October 31, 1927. The Strand Theatre was closed in 1963 and the auditorium was demolished in 1970 to become a parking lot. The facade, with the original name ‘Strand Building’ in stone along the top, survives hosting several business’s and office space.

Anyone have any pics of this Theater? I know where this Theatre was
but have never seen any pics.

I attended the Strand as a youngster in Portland , Maine . Does anyone know why it closed , or as its not listed as being demolished , i can assume the building has been coverted to some other use.

Any info. as to whether or not any of the original theater is still intact ? I feel its such a loss to have all these great old movie palaces demolished or closed ..thanks ! Isaac B Shainblum

I checked the google maps. The lobby portion is intact, now retail and restaurants, but the auditorium has been demolished and is now a parking lot.

The 1955 film The Virgin Queen world premiered here! (Does anybody know why?)

Yes, Bette Davis and her husband Gary Merrill were Cape Elizabeth residents. My mother and I attended the film as Bette’s daughter Barbara and I were class-mates at Waynflete School. I remember that Faye Emerson was one of the attendees.

This house was in operation prior to 1918. The February 2, 1918, issue of The Moving Picture World had this item datelined Portland:

“Extensive improvements costing $100,000 are being made to the Strand theater at 565 Congress street. House will reopen under management of W. E. Reeves.”

An item in The American Contractor of the same date listed the Strand project as involving additions and alterations. The house was owned by the Nickel Amusement Company. lostmemory’s first comment on this theater notes the Austin organ moved from the Nickel Theatre to the Strand in 1917.

The Theatre Historical Society archive has the MGM Theatre Report for the Strand; it’s Card # 432. Address is Congress St. There is an exterior photo dated March 18, 1941. Condition is Good. The report says it opened in 1919 (incorrect), was showing MGM films, and had 2,026 seats.

The Strand’s auditorium was demolished in 1970, according to This page from The Cinema Data Project. The house is listed under its original name, the Big Nickel Theatre.

The Big Nickel was a large upstairs theater with its entrance on Forest Avenue, and it opened on April 3, 1911. In 1915 it was renamed the Strand Theatre and began showing Paramount pictures, with music provided by an organ said to have cost $25,000 (a 1917 source reveals this instrument to have been a 3-manual Austin.) In 1917 the owners acquired the building on Congress Street which would house the rebuilt Strand’s entrance, and the vacant land between that building and the Big Nickel.

The theater was closed in September, 1917, and the original building gutted and rebuilt as a ground floor house, and expanded to reach the Congress Street structure, which was given a new facade. The architects for the project were Thomas Lamb and local architect Austin Pease, with New York theater specialists M. Shapiro and Sons supervising construction.

The rebuilt Strand, equipped with a large stage 90 feet wide and 34 feet deep, opened on June 3, 1918. The opening film was the Mary Pickford feature M'liss. The Strand was closed for refurbishment in the spring of 1930, reopening in June that year with Colonial style decor. The Strand closed permanently in 1963.