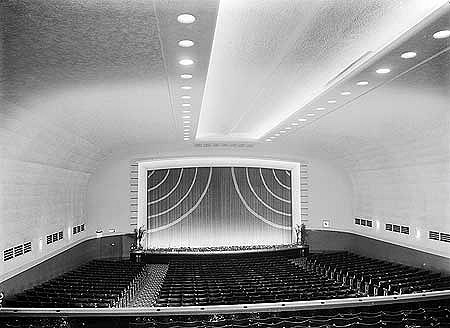 The Odeon was one of the original Oscar Deutsch Odeon Theatres chain. It opened on 14th July 1934 with Sydney Howard in “It’s a Cop”. The archictural firm Whinney, Son & Austen Hall had already just completed the splendid Odeon Theatre Worthing for the company, but this theatre at Bognor was no match for that one.

The rather narrow facade was flanked by a parade of shops. The foyer was a splendid example of 1930’s Art Deco style and this led to the auditorium which was set back at right angles, running parallel behind the parade of shops. Seating here was provided in a semi-stadium plan with a raised section at the rear. There were 592 seats in the stalls and 328 in the raised rear section. The decoration was in a simple streamline Art Deco style with a central ceiling recess containing concealed lighting in the trough.

The Odeon led an uneventful life in this sea-side town until it was leased to an Independent operator from 23rd January 1971 when it was re-named the Regal Cinema. This only lasted a while as it closed on 15th November 1974 with Patrick Barr in “House of Whipchord”.