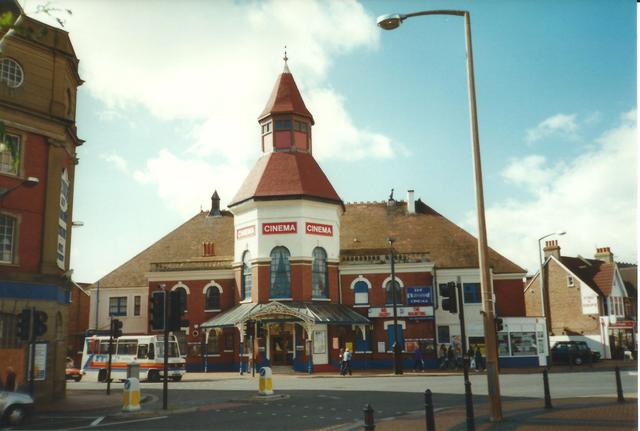 Built in 1885 as the Assembly Rooms it was designed by architect Arthur Smith. In around 1905 it was known as the Queens Hall and some film shows and other entertainments were being held here.

It was opened as a full time cinema known as the Picturedrome on 5th July 1918 with the Cecil Hepworth film “Boundry House” starring Alma Taylor. The conversion had been carried out by architect and owner Peter Dulvey Stonham. A seating capacity of 662 was given and through most of its cinematic life it has been operated by Independent exhibitors and small circuits.

On 1st July 1983 it was taken over by the Classic Cinemas chain and re-named Classic. They were taken over by Cannon Cinemas in 1989 and it was re-named Cannon, later becoming part of the MGM cinemas chain, but retaining the Cannon name. At sometime during these years the building was twinned, and it was operating as a cinema and bingo hall. It then became an ABC cinema.

It was recently operated by ReelTime Cinemas, an independent chain who operate ten cinemas in Southern England and was re-named Picturedrome Cinema again, screening movies in two auditoriums. In the spring of 2007 it was taken over by Picturedrome Electric Theatre Company and in 2008, work began on a renovation programme. On 26th March 2015 a 3rd screen seating 33 was opened in the octagonal tower on the front of the building. On 21st December 2018 a 102-seat fourth screen was added.

On 23rd July 2009, the Picturedrome was designated a Grade II Listed building by English Heritage.

The Picturedrome has changed hands again recently, this time it has been acquired by an independent operator known as Picturedrome Electric Theatre Co Ltd.

The new owners of the Picturedrome also acquired the Plaza Cinema in Dorchester at the end of 2008 another cinema which was formerly owned and operated by the Kent based Reeltime Cinemas.

Nice name for a movie house,in England they do not tear the old stuff down like us in the U.S.A.

The Picturedrome’s second screen, which was situated in the upstairs hall opened on 17 August 1984 when it was owned by the Cannon Classic chain. INDIANA JONES & THE TEMPLE OF DOOM was showing in the main screen and STAR TREK 2 was showing in the new smaller screen.

This cinema never operated as a MGM cinema, MGM owned it, but it remained a Cannon Cinema (MGM owned Cannon by the end of the 80’s). When MGM sold their cinemas to Virgin Cinemas, smaller sites like Bognor were sold to ABC Cinemas. This operated as ABC until it sold again to independent company Picturedome Cinemas who installed Dolby Digital Sound in screen 1 ready for the release of Star Wars: Special Editions in 1996. Dolby Surround was added to screen 2. Rest of its history is as above. Must also be noted that both screens now have digital projection but no 3D.