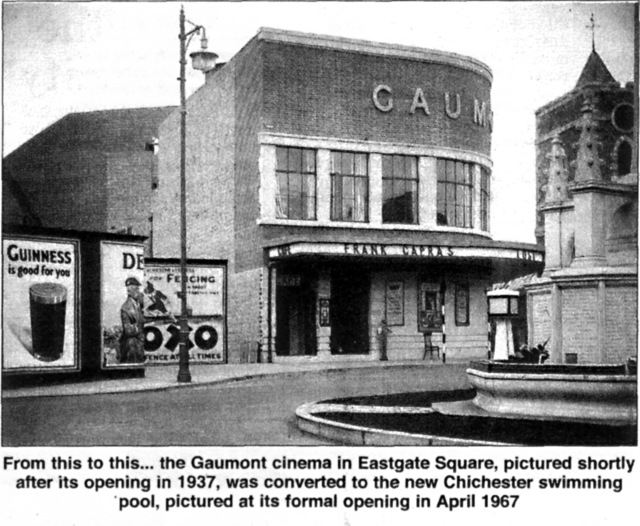 Located on the eastern edge of the city on a corner plot of Eastgate Square at East Street and St. Pancras. The Gaumont Chichester opened on Monday 20th September 1937 with Paul Robson in “King Solomons Mines” and was built in an Art Deco style by architect Harry Weston. This was the only Gaumont cinema to operate in West Sussex.

Built in red brick and stone with a circular frontage, the entrance doors were placed on the side street. A neon Gaumont sign was placed on the top of the curved facade. The paybox was in the outer foyer with a staircase leading up to the rear section of seating. Steps led down to an inner foyer and the front section of seating. The auditorium was of the stadium design, not the normal circuit style and had seating for 874 in the front section and 404 in nine rows more steeply raked at the rear, not a large cinema for this period, but the Gaumont was the largest of Chichester’s three cinemas. The Gaumont had its own individual carpet pattern, not the circuits usual style and seats were red with grey arms in the front section and grey with red arms in the rear.

The auditorium was decorated in the style of an underwater scene. The walls were in shades of blue with painted bubbles, seaweed and ripples. Two large panels painted by the French artist Henri Hague were placed high on each side wall which were floodlit from below. A blue ceiling had a lighting trough down its centre. A restaurant was provided on the first floor which had its own separate entrance to the left of the main cinema doors.

Gaumont closed this on 15th December 1951 but it was leased out two years later to private owners and reopened. When the Rank Organisation took over and merged the Odeon and Gaumont releases, the Gaumont benefited by the stronger programmes and things looked even better for the Gaumont when Rank closed the Odeon Chichester in February 1960.

This was short lived though, as on 15th October 1960 Rank in a reciprocal deal with the Granada Theatre’s chain, closed the Chichester Gaumont, leaving only the Chichester Granada open and in Epsom, Granada closed their cinema, leaving the towns Rank operated Odeon open.

The last films at the Gaumont were a Walt Disney Double Bill -“Toby Tyler” and “Zorro, The Avenger”. The council purchased the Gaumont on 20th December 1961 and converted it into a swimming pool, leaving the original watery decorative motifs intact. The main foyer also remained virtually unchanged.

By 1966 the swimming pool had closed, although the restaurant, by then Indian, was still open. Work on the demolition of the building began in December 2007.