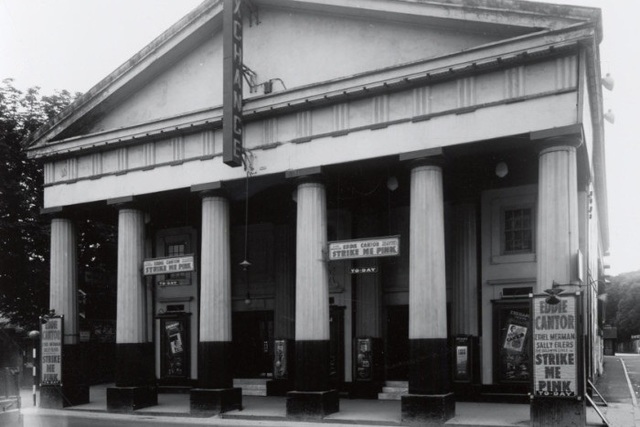 The Corn Exchange was built in 1832 as a market place for farmers, corn merchants and millers. It is a prominent building with a large pediment over an entrance porch, which is supported by six huge Corinthian columns.

In February 1884, it began its life as an entertainment venue when the Chichester Minstrels performed in the building. In August 1889 it was taken over by Joseph Poole and in October 1899 he brought Kinematograph shows to the building. By 1910 Poole’s were screening films regularly at the Corn Exchange, although stage performances and special events were still held in the building.

From 6th November 1922 it became a full-time cinema and in 1927 it was closed for three months for a re-modeling by architects G.S. Hall and G. de Wild. It re-opened as the Exchange Cinema on 8th December 1927 with Harold Lloyd in "The Kid Brother". It was now operated by R.R. Wainwright’s London & District Cinemas Ltd. circuit.

Taken over by the Granada Theatres chain on 6th June 1948 it was closed for re-furshment to the designs of architect Robert Cromie, re-opening on 22nd November 1948 as the Granada Exchange.

By 1960, it was the only cinema operating in the town (both the Odeon and Gaumont had closed). In 1977 Granada applied for permission to convert the cinema into a bingo club, but this was refused and it went to appeal at a Public Enquiry in 1979, which was turned down. Unable to convert the building into a triple-screen cinema due to its proportions and also it being a Grade II Listed building, Granada decided to close the cinema.

The Granada closed on 9th August 1980 with "Star Wars. The Empire Strikes Back". It remained empty and unused for six years and plans were proposed to convert it into two retail units with offices built above, a scheme which actually passed the Listed building consent. However this scheme was never carried out. It was converted into a MacDonalds restaurant, which remained open into at least the late-1990’s. It is curently (in 2008) occupied by a Next clothing store. The magnificent facade remains untouched, but inside all traces of its former past life have been hidden away from view.

A parade passes by the Granada Cinema in this 1969 photograph:
View link

I seem to remember that the MacDonalds usage actually lasted into the 21st century – possibly as late as 2004.

A photo of the former Granada HERE

The Granada had a black and white cat called Bridget, possibly inspired by the Ray Stevens 1974 hit “Bridget the midget” Females watching the Sunday horror film would scream as Bridget brushed past their legs. This cat was more effective at keeping the rodents at bay than the customary Rentokil pellets.