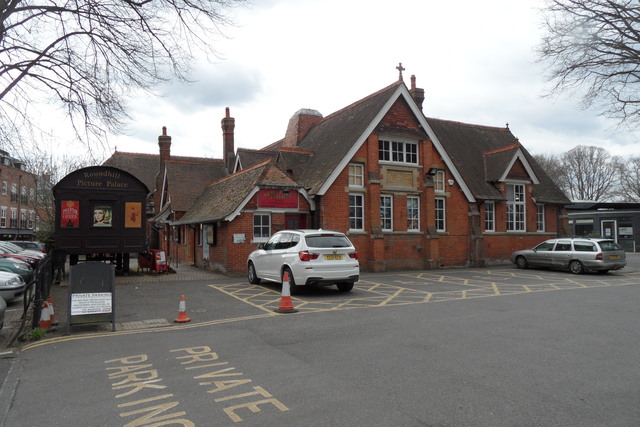 The inspiration behind the company was a love of all things country and the desire to keep traditional ways and values in a rapidly changing world. Louise Adams and her brother Paul decided to research and construct a range of huts made in the old way, paying attention to detail and achieving a product as close to the original as possible.

The Shepherd’s Hut was originally designed as a complete accommodation and store room for the shepherd while he tended his flock. Roundhill Shepherd Huts produce customised huts for use as offices, guest rooms or just extra space.

Parked next to the main door at the New Park Centre in Chichester, the Roundhill Picture Palace was inspired by the cinematograph shows that toured the country with travelling fairs in the early years of the twentieth century, albeit with a rather plusher interior, with thick carpets, cinema seats, fluted columns and cherub uplighters. Covering the walls and ceiling, a series of paintings by Paul Adams pay homage to classic British films from “Swallows and Amazons” to “Harry Potter”, by way of “Doctor Zhivago”.

The screening equipment, however, is state of the art digital, utilising a 65” screen.

The Roundhill Picture Palace, which opened on Thursday 11th December 2014, is used for public screenings at the New Park’s annual International Film Festival, though its main use is for private hire.

On 8th January 2018, while visiting a friend living in Bognor Regis, I hired the Picture Palace for a private show. The cost was £75.00 for three hours. Patrons take along their own DVD/Blu-ray, and we enjoyed an afternoon screening of the Bette Davis classic “Now, Voyager”.