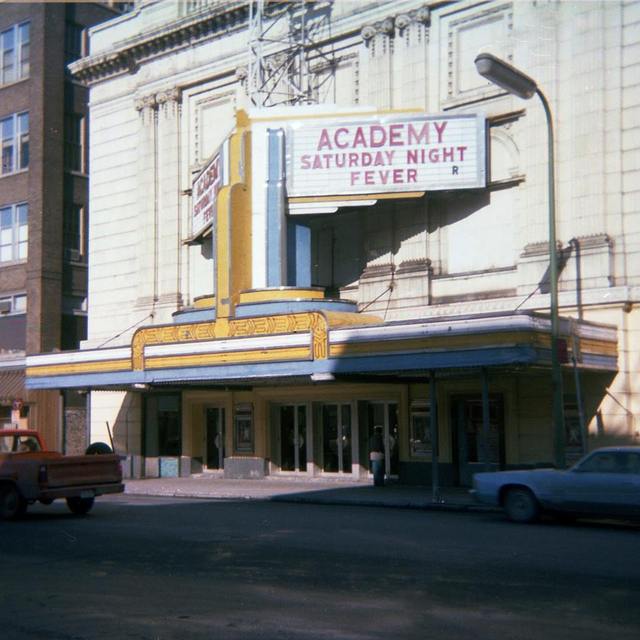 The Academy Theatre opened inside the old and remodelled Sam S. Shubert Theatre which was so completely refurbished it requires its own entry in the Cinema Treasures listings.

The S. S. Shubert Theatre originally opened on August 28, 1910 seating around 1,600 and in the mid-1930’s, it was renamed the Alvin Theatre and presented films, live theatre and finally strip shows.

It was remodeled by Ted Mann in 1957, to the plans of architectural firm Liebenberg & Kaplan, and reborn as the Academy Theatre – a popular 70mm roadshow house. It opened with “Around the World in 80 Days” in Todd-AO on July 12, 1957. At that time, it had about 800 seats and remained one of the main roadshow houses in the Twin Cities until that form of distribution/exhibition fell out of favor.

It closed in 1983 and remained vacant until 1999 when the whole theatre, minus the stage house, was literally moved a block and half away to make room for a major entertainment complex.

The Academy Theatre awaited a restoration as a venue for dance and music presentations. The group heading its resurrection, Artspace raised money to restore the theatre. It reopened on September 9, 2011 as the Goodale Theatre, part of the Cowles Center for Dance and the Performing Arts.

The projector in the original Shubert/Alvin days was atop the second balcony. With the coming of Todd-AO in 1957 it was relocated to the back of the firt balcony. The second balcony was actually closed off at that time and never used again.
Just before the theatre was moved to it’s new location I got tour of the place. The old second balcony not only still had it’s seats (most likely 1910 vintage) and even the remains of an old projector.

Only a few days short of its 101st Birthday, the old Shubert has reopened. Renamed the Goodale theatre, part of the Cowles Center, the theatre is now a mix of the old and new. One might call it the “incredible shrinking theatre”. Built with 1,600 seats, in 1957 it was downsized to 800, and now has dropped to a mere 500. The second balcony, which was closed off in 1957, has been removed. Part of the back of the main floor has been converted into a coat room. The boxes, removed in 1957, were not replaced. Still it is an impressive venue. Although most of us may not be around in 2101, hopefully the Shubert, turned Alvin, turned Academy, turned Goodale will be.

The Academy was a gem. The audience-stage relationship is almost unique in U.S. commercial legit theatres, which tend to be larger, with problematic sightlines. The first balcony was only 7 rows deep & offered a perfect view of the stage. The second balcony had a portion of the front center section removed to accommodate the image thrown by the Todd-AO projector from the booth at the rear of the first balcony. This was one of the best Todd-AO installations I have seen, with a deep curved screen in perfect proportion to the auditorium.