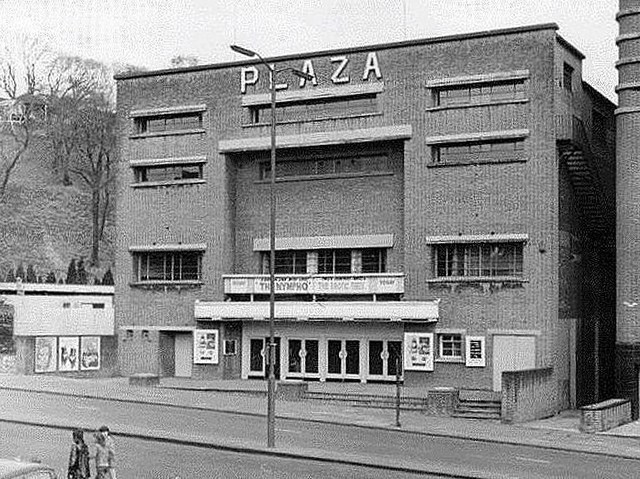 Built on the site of an earlier Plaza Cinema, which had originally opened as the Gem Cinema in December 1910, becoming the Colosseum Picture Palace and John Bull Cinema (it has its own page on Cinema Treasures). This was demolished for the new Plaza Cinema to be built for Independent operator Benjamin Kennedy who also owned and operated the adjacent Hippodrome Theatre (in recent years this operated a bingo club, but is threatened with demolition in 2014).

The Plaza Cinema was designed by noted cinema architect Archibald Hurley Robinson but in my opinion it was not a particularly beautiful building on the outside. It had a plain, rather unfinished look. Inside the auditorium, seating was arranged in stalls and balcony levels. Again like the exterior, the interior decoration was rather plain. The Plaza Cinema opened on 28th May 1936 with Fred Astaire and Ginger Rogers in “Top Hat”.

It was taken over by a local Independent chain of Miles Jervis in 1954 and they installed CinemaScope opening with “The Robe” on 14th June 1954. From 19th August 1955 it was taken over by the Gaumont/Circuits Management Association section of the Rank Organisation.

It was twinned in 1973 and re-opened on 29th April 1973 with Glenda Jackson in “Triple Echo” showing in the former stalls area which now seated 551 and Simon Ward in “Young Winston” in the former balcony area which now seated 199. After the Odeon across the road closed in 1975 (it has its own page on Cinema Treasures), the Plaza Cinema was re-named Odeon, but to locals it would always be referred to as the Plaza Cinema.

The Odeon was closed on 27th October 1990. It became a laser games centre for a while and was demolished in 1997. A small nightclub named ‘Krushh’ (currently J.B’s Club) was built on part of the site, the rest of the land is used as car parking space. By 2014, the Krushh nightclub building had been demolished and the site is now a builders yard.

1995 shot showing the closed Odeon with the Plaza letter scars and the Hippodrome beyond here:–

Miles Jervis bought The Plaza as a job lot with the Alhambra Dudley Port. Plaza (renamed KINGS) West Bromwich There was another. I cannot rember the name.. AGE..

My parents used to say that it was nicknamed ‘The Ranchuss’ by locals because of the number of Westerns that used to be shown there… Not surprised to hear about the Hippodrome – Dudley Council isn’t exactly renowned for any appreciation of the built environment or the creative arts….