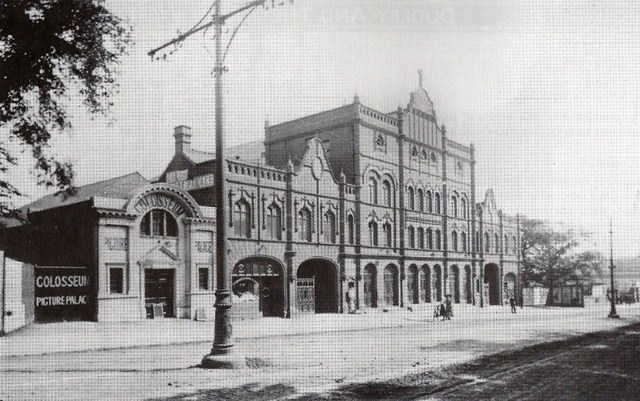 Located in Dudley, West Midlands, on Castle Hill, adjacent to the Opera House. The Colosseum Picture Palace was opened on 24th December 1910. It was a corrugated iron structure, with a fancy brick facade. All 500 seats were on a single floor. It was closed for a while in 1911, but re-opened. Closed again around February 1911 it was sold in 1913.

Taken over by a new operator, it was refurbished and now had 510 seats, and was re-named Gem Cinema. Another operator took over in 1914. In October 1916, under new ownership, it reopened as the John Bull Cinema. In December 1918, just after the end of World War I it was re-named Scala Cinema.

Around 1928, it was taken over by Benjamin Kennedy, who also owned and operated the adjacent Opera House, and it was re-named Plaza Cinema. It was closed and demolished towards the end of 1935, and in 1936 Ben Kennedy built his new Plaza Cinema on the site (which has its own page on Cinema Treasures).