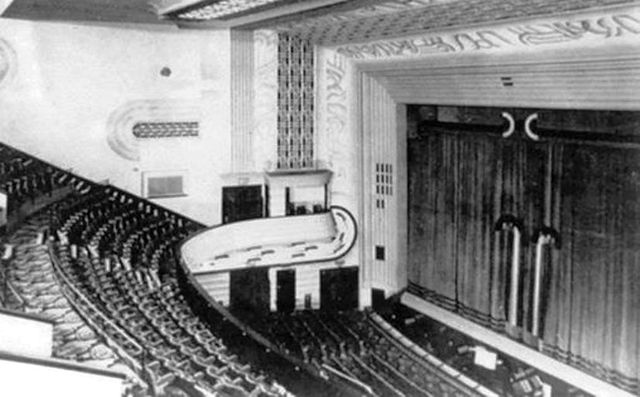 Located in Dudley, West Midlands, on Castle Hill, close to the entrance of Dudley Zoo. The Opera House was opened in September 1899, and was designed by architect A. Ramsell with seating provided for 1,500. By the early-1900’s films were part of the variety programme. By the summer of 1910, it was being advertised as the Opera House Picture Palace and Electric Theatre, when films were screened in the afternoons. Around 1920, it was taken over by Benjamin Kennedy and was again in use as a live theatre, although in 1930 it was equipped to screen sound films. Ben Kennedy now also operated the Plaza Cinema next door, which he demolished and rebuilt in 1936 to the plans of architect Archibald Hurley Robinson. The Opera House was destroyed by a fire in November 1936 (the ‘new’ Plaza Cinema next door was saved from destruction).

Ben Kennedy employed noted cinema architect Archibald Hurley Robinson again, to build a new theatre on the site of the Opera House. The Art Deco style Hippodrome Theatre was opened on 19th December 1938 with Jack Hylton and his Band, plus variety acts. It seated 1,621 in stalls and a steeply raked circle levels, and had a 45 feet wide proscenium. It was equipped to screen films, but there is currently no record of any films being shown in what was dubbed the ‘Showplace of the West Midlands’, a major touring theatre for variety shows and pantomimes. Many stars appeared at the Dudley Hippodrome Theatre, including; Flanagan & Allen, the pianist ‘Hutch’, Allan Jones, Chico Marx, Jackie Coogan, Laurel & Hardy, Bob Hope, Vera Lynn, Evelyn Laye, Jack Buchanan, Tommy Handley and George Formby. The theatre presented an annual pantomime which ran for several weeks around Christmas and into the New Year’s with casts that included Harry Secombe, Derek Roy, Tommy Cooper, Eve Boswell, Beryl Reid and Morecombe & Wise. In 1958 the pantomime “Cinderella” starred Shirley Abicair, and this was followed by one night concerts by Chris Barber’s Jazz Band and a sell-out concert by American singer Paul Anka. The Dudley Hippodrome Theatre was closed by the Kennedy family on 14th March 1958.

It was taken over by new operators, and was little used apart from a couple of concerts in 1958 by Eric Delaney and his Band, and Johnny Dankworth and his Band. In 1959 there was a pantomime “Sleeping Beauty” and sell out concerts by Cliff Richard. The building was then closed more often than it was open, and then began presenting a string of strip-tease type shows, with a pantomime at Christmas and evenings of wrestling. The pantomime “Cinderella” starring Reg Dixon was staged at Christmas 1963. The final show at the Hippodrome Theatre was presented by the West Bromwich Operatic Society of Ivor Novello’s “Glamorous Nights, which ended a weeks run on 29th February 1964.

The theatre was taken over in March 1964 by Vic Kendrick and re-opened as The Dudley Hippodrome Casino Club, in use as a bingo club and nightclub. Taken over by Ladbrokes, it became Cesar’s Palace on 15th October 1973 with Tommy Steele performing. Bingo ran in the daytime and the shows began at 10pm. Others stars appearing at this time include; Ken Dodd, The Bachelors, Mike & Bernie Winters and Des O'Conner, Tommy Cooper, Bob Monkhouse, Gene Pitney, Frank Ifield, Frankie Vaughan. Roy Orbison was the final star ever to perform on the Hippodrome Theatre’s stage on 16th August 1974.

It became a full time Gala Bingo Club which closed on 19th September 2009.

I can remember going to see pantomimes here as a child in the 1950’s and loving the place.

Have loaded the picture of the Archibald Hurley Robinson Theatre. Our Company “The BT Davis Circuit signed contracts to Buy the Kennedy Circuit. but was gasumpt..

The ongoing battle to save the Hippodrome was highlighted on ITV Central News on 11/08/2021.