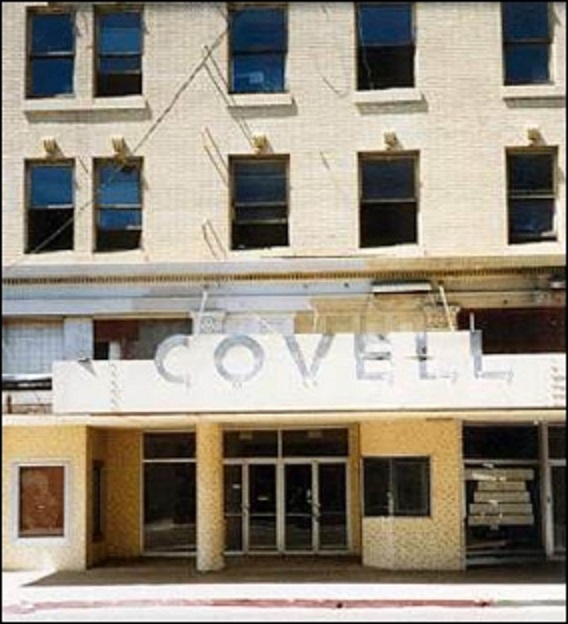 The Covell Theater was closed and in state of disrepair as of 1996. It was demolished in 1997.

The covell theatre, was in the covell hotel building, around the corner from the Strand. It was a run down place. The main floor sat around 700 and the upstairs balcony sat around 250. In the 70’s it showed porn and closed down in the early 80’s. Last time I was in there was around 1982, but the interior was just destroyed with graffiti, the screen was torn, and half the seats were destroyed. The auditorium had no murals or anything of significant value, as the walls were whitewashed. At that time, in the 70’s the area was skid row and a lot of hobos and drunks slept in there.

District Attorney Alexander Wolfe says he has been guaranteed “100 per cent cooperation” from theater officials in keeping minors away from â€œNot Tonight Henryâ€, a sexy movie playing at the Covell Theater. Wolfe and members of his staff viewed the film Wednesday night, took names of several juveniles attending the theater and issued a warning to the manager to stop letting youngsters in or face arrest.

Wolfe said Rose Saso, district theater manager, yesterday told him: “We want to work with you 100% percent.â€ Last night, said Wolfe, extra theater personnel was placed at the door to screen out all minors attempting to buy tickets.

When the house was still called the Princess, it was closed following a fire, reopening in mid-1944. The June 3, 1944, issue of
Boxoffice described extensive repairs and renovations to the theater. It also noted that William B. David was the vice president and general manager of the circuit that operated Modesto Theatres. David was apparently involved in the design of the repairs and renovation, but the magazine didn’t say he was the architect.

So far I’ve found no references in Boxoffice from when the house was called the National Theatre. That might have been the opening name, as is suggested by the Historic Modesto web site. Unless the house was called the Covell only briefly after opening, my guess would be that the organ installed in the Covell Theatre in 1920 was ordered before the building was completed and the theater named, so the Wurlitzer company recorded the sale under the name of the hotel project.

Most likely the house was operated for some time under lease by the National Theatres Syndicate, which was based in San Francisco and which was well-established throughout California by the mid-1920s. Many of their theaters bore the company name, especially in the Central Valley.

Here is a February 1975 ad from the Modesto Bee:
http://tinyurl.com/om32ev

Status should be changed to closed/demolished.

I wonder what Disney movies George Lucas saw here when he was young.