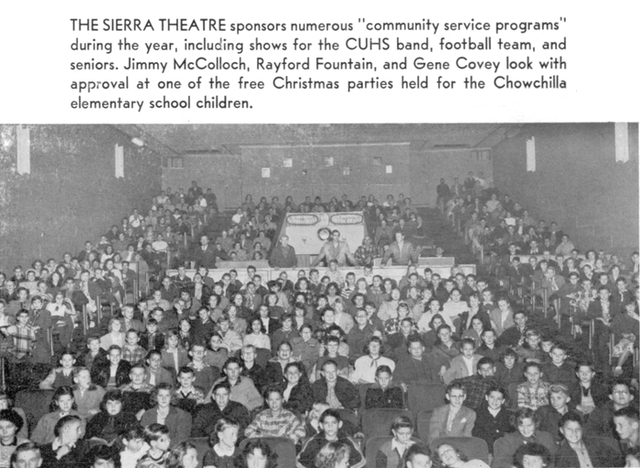 The Sierra has been demolished, to be replaced by townhomes. Here is an undated photo:
http://tinyurl.com/2sq7hd

The Sierra Theatre in Chowchilla opened in October, 1941, according to the February 14, 1942, issue of Boxoffice.

The September 25, 1967, issue said that the Sierra had reopened after repairs and updating, and at that time had 474 seats.

The City of Chowchilla’s web site says that the Sierra Theatre was built in 1941 and demolished in the summer of 2006. It doesn’t give the year the house closed. It displays this photo.

About halfway down this web page are two photos of the Sierra from 1997. The caption says that the theater closed sometime in the mid to late 1970s.

Various newspaper and magazine items from the 1940s and 1950s name R. B. Smith as the owner and operator of the Sierra and Chowchilla Theatres. The older and smaller Chowchilla Theatre was closed in late 1953 and apparently never reopened.