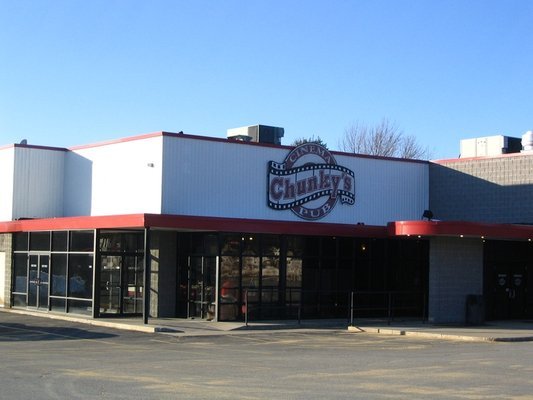 Not a bad restaurant, with good food that’s reasonably priced (except for drinks) but not necessarily a place to SEE a movie.

Sound system leaves much to be desired.

Started as a one screen theatre had second screen added then both screens were twinned to make it a four screen complex.

In the mid-1980’s it had an arcade which was acessable without having to pay admission.

Chunky’s used one of its auditoriums for a kitchen when it opened here in mid-1990’s. Chucky’s Cinema Pub closed on January 6, 2019.

This used to be the 495 Cinemas. It was first run, as far as I’m aware, in the 80’s and 90’s. This was the only cinema I knew of in Haverhill, along with the cinema in Stateline Plaza, which I guess was technically Haverhill (though I thought of it as being in Plaistow, NH). I remember seeing E.T. in the cinema at Stateline with a bunch of neighborhood kids when I was about four or five, and that the parent in charge gave us all popcorn in brown lunch bags to sneak into the theater. That cinema was turned into a mattress store, and I think it’s still standing though recently there was a new Shaw’s put in and the whole plaza was changed- haven’t been by there to see if it survived. There was also a drive-in screen on route 125 in Plaistow, which may have still been in use in the early 80’s, I can’t remember for sure- the decrepit screen stood for years, but is now gone.