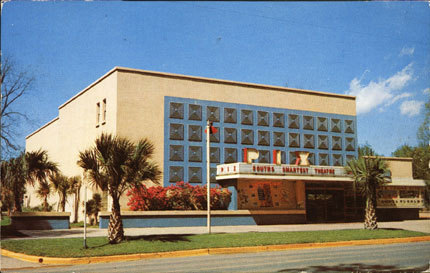 Some photos of the Pix and other theatres in Rock Hill:
http://www.scmovietheatres.com/rockhill.html

i talked to a gentlemen about a year ago who told me the pix theater had been bought out by a real estate company and that they were using at least part of the building for offices. i haven’t been buy in awhile but was also told that no real outside renovations were done and that the pix sign is still there intact.

*also to expound upon the post above made by mr. harris what’s really neat if you look closely at this photo

you will see circled in the photo above an original one sheet from fleming’s classic “gone with the wind.” here is what the poster looks like in all of its glory

The Cinema and Pix theatre were bought out by the same company in the early seventies.Both their ads in the paper were the same and together.Probably one of those Carolina theatre chains bought them.

August 10 1971 and the PIX THEATRE has a MIDNIGHT SCREAMIERE with “HOUSE OF DARK SHADOWS”.Free personal Ghosts kits to be given out while supplies last.And Bumper stickers.{wouldn’t you like to have one of those gems.]

The current (Dec 2010) Google street view shows some letters on the marquee – looks like it’s a large consignment/furniture/rug store now.

The PIX Theatre is now occupied by New Day Church, a Southern Baptist Church serving the Rock Hill Community. The theatre is currently being restored to it’s former glory by our church, and is a wonderful place for worship, praise, breaking bread, and fellowship. Sunday School @ 10am; Worship Service @ 11am & 6pm; Wednesday Night Services @ 6pm.