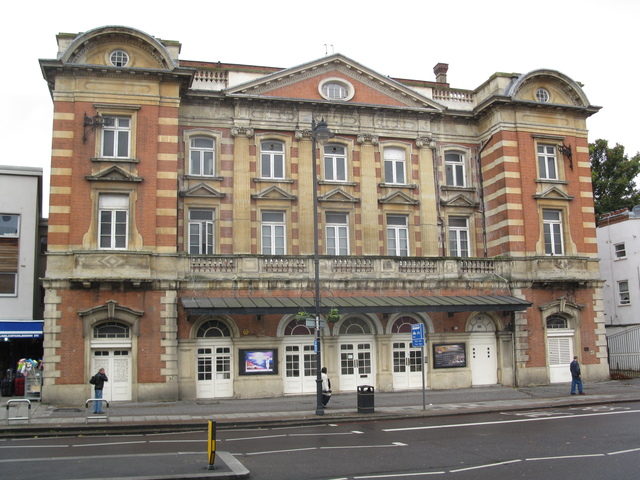 Located in the north London suburb of Tottenham. The Palace Theatre of Varieties opened on 31st August 1908. As its name implies this was variety theatre, a type of entertainment which followed on from the music hall tradition. In 1913 it was presenting a mix of variety, drama and ‘pictures’ and was operated by United Varieties Syndicate Ltd.

Designed by noted theatre architects Wylson & Long in an Ionic style, the restrained symmetrical façade in red brick and stone is decorated with Ionic palasters and pediments. Inside the auditorium seating was provided on stalls, dress circle and balcony levels. The decorative scheme was Grecian, there were three boxes on each side of the proscenium and large gilded figures of Muses in niches flanking the proscenium. The stage was 32 feet deep and there were eight dressing rooms.

In 1922 it began showing films in the afternoons some days a week and from 21st November 1924 it was leased out and became a full time cinema, re-named the Canadian Cinema which was taken over by Provincial Cinematograph Theatres (PCT) in 1925. It would most likely be at this period of time that the projection box was built on the rear of the stage and this theatre remained a back-projection cinema for the rest of its life. There was no room available in the rear of the dress circle and to have constructed a projection box and to have one in the rear of the balcony would have given too steep an angle and a keystone effect on the screen.

The name reverted back to Palace Theatre from 9th January 1926. PCT were so confident they were onto a winner showing films at the Palace Theatre that they imported a Model D Wurlitzer 2Manual/6Rank theatre organ, which was shipped from the factory in Tonawanda, USA on 21st February 1925. It was the second Wurlitzer organ to be installed in a British cinema (the first being another PCT cinema, the Picture House, Walsall in Staffordshire.) The Wurlitzer organ was inaugurated on 6th April 1925 and was played by organist Jack Courtnay. In 1957 the organ was sold and removed to be installed in Rye College, Rye, East Sussex.

From February 1929 PCT were taken over by the Gaumont British Theatres circuit and it remained under their control, later merged as CMA with the Odeon Circuit and finally the Rank Organisation. Rank closed the Palace Theatre on 28th June 1969 with Yul Brynner in “The File of the Golden Goose” and Burt Reynolds in “Sam Whiskey”.

The building was converted into a Mecca Bingo Club which operated for many years. By the early-1990’s it was being operated by the smaller chain of Jasmine Bingo Clubs and the building had been given a Grade II Listed status.

The Jasmine Bingo Club closed in February 1996 and after a while the building became a church called the Palace Cathedral. In the middle of March 2009, the Palace Cathedral church moved out of the building, and another church took over. They have erected a ‘temporary drop wall’ down from the front of the dress circle and are using the former rear stalls only (now painted white). The remainder of the auditorium is not in use.

When I was at a projectioist training school in London in 1963 one of the fellow students worked at the Palace Tottenham. So the teachers always had to remember to point out that the film lace up was reversed for that cinema (rear projection).
The student told me that sometimes at the Palace a person would mistakenly walk across the stage whilst the film was showing, so the audience got a large shadow ouline of them on the screen!.
Glad that the building is listed still in use and open.
Always looks impressive from the front.

The Palace survived the London riots, (despite being in the heart of the first day rioting and looting) with apparently little more than a few broken windows, seen boarded up in these August 2011 views:–

Some photos of the former theatre here (taken July 2012):–