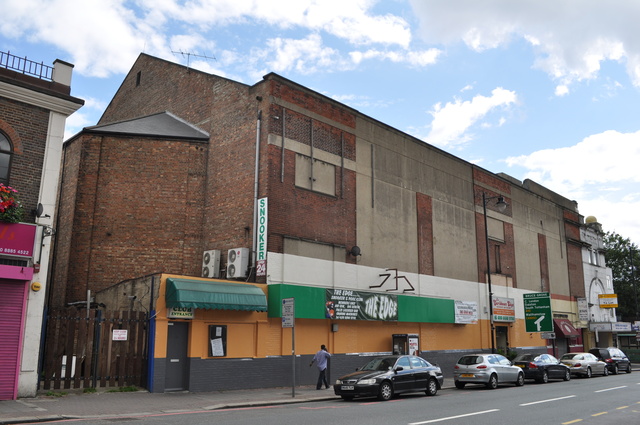 Located in the north London district of Tottenham. The Bruce Grove Cinema was an imposing building located on Bruce Grove, across the street from Bruce Grove railway station. It opened on 14th July 1921 with Douglas Fairbanks Sr. in “The Mark of Zorro” and Ray Berger in “Cupid Hires a Taxi Cab”. It was operated by the independent Tottenham Cinema and Entertainment Co. Ltd. It had a seating capacity of 1,791 in stalls and circle levels. There was a café/lounge at the rear of the circle. It was equipped with a Jardine 3 manual 26 ranks organ which was opened by organist Herbert Griffiths. The two organ chambers were on either side of the proscenium.

Designed by local architect Charles E. Blackbourn, who had offices in High Road Tottenham and Old Street, it was built by Knight & Sons. The corner entrance was dominated by a large domed cupola tower and was illuminated at night by hundreds of light bulbs. In 1923 a large ballroom was built adjacent to the cinema along Bruce Grove, and there was a car park at the rear. Around 1930 it was equipped with a British Talking Pictures(BTP) sound system.

It was closed on 23rd June 1933 for reconstruction to the plans of noted cinema architect Robert Cromie. Externally it was modernised. In the auditorium which had seating for 1,789 in stalls and balcony levels, the space was given an Art Deco style. It reopened on 18th August 1933. By 1935 the Jardine organ was not being used and it was removed from the building and installed in the nearby High Cross Congregational Church on Tottenham High Road. It remained there until 1963.

The building was converted into a Star Bingo Club and remained in this use for many years. At some time the building was twinned with the stalls area becoming a snooker club and the former balcony extended forward to the proscenium to remain a bingo club for a few more years. It was around this period of time that the domed cupola was removed from the top corner of the building over the entrance. Bingo upstairs closed in May 1983 and the space was empty until 1986. It was then converted into an indoor cricket pavilion, but this was a short lived venture and it became a Quazar laser ‘shooting gallery. This was another fad and again the building became vacant until the early-1990’s when it was converted into a church, known as the Freedom’s Ark. Snooker continued in the former stalls area, together with a Caribbean restaurant.

The former ballroom (always a separate building beyond the entrance to the cinema’s car park) was converted into four screen cinemas by Star Cinemas, opening as Studio 5, 6, 7, 8 in July 1974, with seating for 104, 115, 115 and 110. They were closed on 12th December 1981 and by 1985 this part of the Bruce Grove complex was converted into a banqueting suite and function rooms, known as the Regency Rooms, which remains open today. (This has its own page on Cinema Treasures).

In May 2011, the Freedom’s Ark church vacated the Bruce Grove Cinema building and moved to another historic building in Tottenham. The upper part of the building was ‘To Let’ and was taken up by the Kingdom Life Ministries. In January 2019 the former stalls area (previously a snooker club/Caribbean restaurant) was converted into a Roller Nation Roller Disco.

On 14th July 2021 the Roller Nation is celebrating the 100th anniversary of the opening of the Bruce Grove Cinema by screening its opening silent film “The Mark of Zoro” starring Douglas Fairbanks Sr., which will be accompanied by organist Donald MacKenzie (resident organist at the Odeon Leicester Square) playing an electric organ.

The Bruce Grove Cinema was equipped with a theatre organ manufactured by Jardine & Co.

The ballroom was not at the rear of the cinema as stated, but a seperate building higher up Bruce Grove, and was situated above a parade of shops, probably owned (or built) by the cinemas owners.