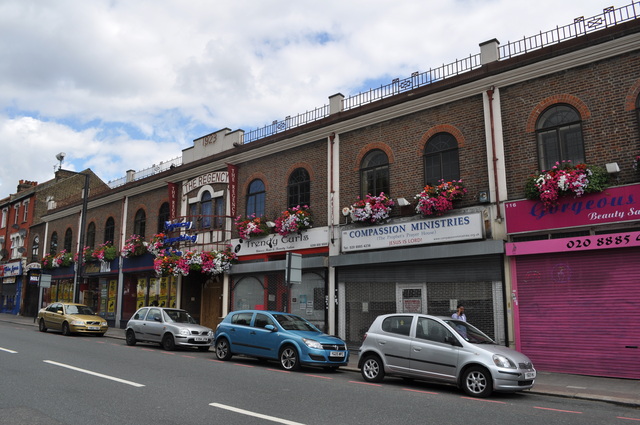 Located in the north London district of Tottenham, next door to the 1921-built Bruce Grove Cinema. In 1923, the owners of the cinema commissioned the cinema’s architect Charles E. Blackbourn to design a ballroom, to add to the cinema’s amenities.

It opened in 1923 as the Bruce Grove Ballroom, with the ballroom upstairs at first floor level, and shops on the ground floor. There was also a car park at the rear of the building.

The Star Cinemas chain had taken over the Bruce Grove Cinema in 1962, and closed it in August 1963 to become a bingo club. They continued to operate the ballroom until 1974, when they converted it into a four-screen cinema, opening on 14th July 1974 as Studios 5,6,7,8. A new projection box had been built at the rear of the building which enabled (if required) for all four screens to show the same film. The auditorium seating capacities were 107, 110,115 and 118. Opening films were Warren Oates in “Dillinger”, a revial of Gregory Peck in “The Guns of Naverone”, a double bill of a Bruce Lee film and Fay Dunaway in “Bonnie & Clyde” and in Studio 8 “Love Making-Hot Style”. Studio 8 was always programmed with this type of soft core sex film.

The building was then empty for a couple of years until it was returned to a single space and re-opened as the Regency Banqueting Suite in 1984.

How odd they should name it 5,6,7 and 8 when there was no existing theatre in operation and, even when it was, it was a single screen.

The Regency Suite, former Cinema ballroom and then Studios 5-8 cinemas boarded up in August 2011. I think this was as a result of the riots rather than closure.