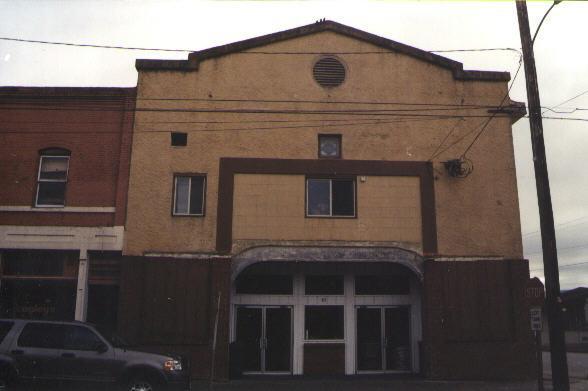 This former theater building, constructed as the Liberty Theatre opened in the middle of 1921. Following a remodel in 1931, it reopened on October 10, 1931 as the New Liberty Theatre. It was closed as the Coquille Vally Cinema in the late-1950’s or early-1960’s. It is currently used as a private residence.

The Liberty theater as it was built is currently a private residence. The balcony and projection booth were converted into a large apartment. The original restrooms and lounge are still intact under the lobby but were closed and used for storage after restrooms were built on the lobby level. After the theater closed the furnishings were sold to the Sawdusters for their Roxy theater only to have their theater burn a few years later. The projection equipment and screen were sold off and are in storage in Coos Bay. Interestingly enough on the right side of the building if you were facing it has a great mural showing downtown coquille 100 years ago and the theater is in it.

The Liberty Theatre Opened Its Doors Sometime Around The Middle Of 1921 And It Is A Really Popular Theatre For Coquille, They Even Appeared In Coos Bay Newspapers Too. After 10 Years Of The Original Building, The Liberty Was Once Closed And Remodeled In October 1931 And Then Reopened On The 10th. In November 1954 (Months After The Noble Theatre In Coos Bay Closed Its Doors), The Liberty Theatre Installed CInemaScope. The Liberty Was Closed In An Unrecognizable Day Around The Late 1950s Or Early 1960s, But The Liberty Could Be Hard Finding Information Depending It Could Say Portland And North Bend Locations (The North Bend Location Is Very Easy To Find Stuff, Depending If You Look Stuff 1955 Or Higher).

Jack Ondracek owner of the Rodeo Drive-in Theater in Bremerton, Washington, operated this theater in the 1970’s.