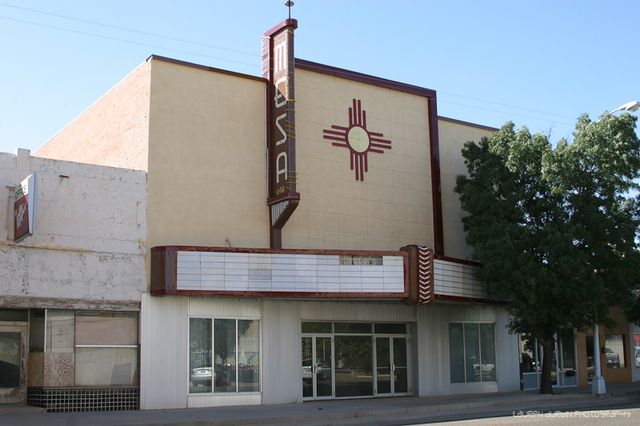 The second Mesa Theatre to operate in town was opened August 26, 1931. It had 1,000 seats and was designed by architect E.C. Parker. It was badly damaged by a fire in 1949 with only the walls surviving.

The third Mesa Theatre was constructed on the same site. It was designed by architect Jack Corgan and seated 784. It was opened December 29, 1948 and closed November 20, 1960.

Thank You, for the information,you gave on mesa theatre & Clovis nm

The Mesa Theatre suffered a major fire and was rebuilt in 1948. Apparently the walls survived the disaster. Reconstruction was about to begin, according to Boxoffice of March 6, 1948. Operator E. R. Hardwick said that everything in the theater would be new, including the four (segregated) rest rooms. The stadium-style auditorium was to seat 768. The architect for the project was Jack Corgan.

Does anyone remember an early 1950’s restaurant called The Aristocrat? My parents, Stan and Jo Curkee, ran it. Some women’s clubs held luncheons there. I’d really apreciate any photos of it. , rbrtptrck

It'smy understandingthat Norman Petty owned this at one time. Didn’t the auditorium ceiling have a star covered sky?

Jack Corgan architected the third Mesa Theatre in Clovis launching December 29, 1948 with “Deep Waters.” In October of 1960, the theatre which was only open two days a week at that point switched to all Spanish films. Its last screening was on November 20, 1960 with “Dos Maridos Baratos.” It was then that Norman Petty bought the 784-seat theatre and converted for non-theatrical purposes.

E.C. Parker architected the second Mesa Theatre in the same spot for Griffith Theatres opening to two full houses on August 26, 1931 with “I’ll Take This Woman.” It held 1,000 patrons. The silent era Mesa Theater launched in 1918 and competed with the Lyceum until purchased by Lyceum owners in the 1920s.

Circa June 1942 photo added credit Jack Hill, The Clovis Times, Palace of the Governors Photo Archives. “Maisie Gets Her Man” at the Mesa Theatre.