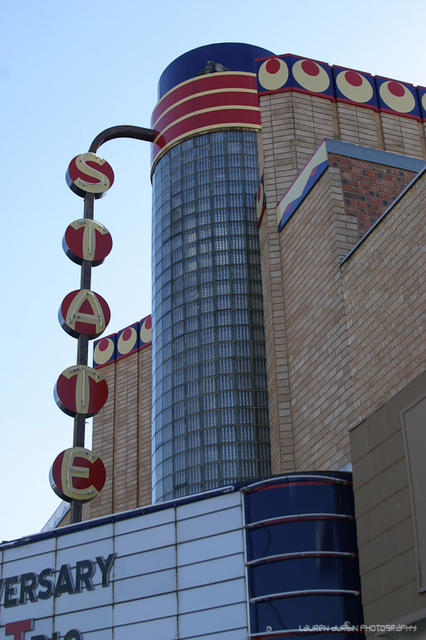 Although a common name, this State Theatre, which was opened January 3, 1940, featured some uncommon and unique, colorful signage. Its centerpiece was a huge circular column that was covered in glass brick on the front and was trimmed in red and blue on its top. Attached to and protruding from the column was a vertical support that had State spelled out in individual white letters on red circular backgrounds. The theater is still open today, but instead of movies, features live musical acts.

My photograph of the STATE www.flickr.com/photos/lastpictureshow/222517222/

The STATE has been added to New Mexico’s National Register of Historic Places.

A closer look at the STATE’S unique and colorful sign.

Boxoffice of March, 1988, said that Commonwealth Theatres had closed its State Theatre in Clovis the previous December 18, the same day the circuit’s new North Plains four-plex was opened.

A 1944 Boxoffice item said that E. R. Hardwick, long-time operator of the State, had entered the theater business in 1909 as an usher, and had been in charge of theaters in Clovis since 1913. He became an affiliate of Griffith Theatres in 1933.

Does anyone remember an early 1950’s restaurant called The Aristocrat? My parents, Stan and Jo Curkee, ran it. Some women’s clubs held luncheons there. I’d really apreciate any photos of it. , rbrtptrck

The January 1, 1940, issue of the Clovis News-Journal said that the formal opening of the new State Theatre would take place at 7:00 PM on Wednesday, January 3.

The State Theater Marquee was built by Hi-Glo Neon signs of Clovis which was owned and operated by Rowland Tessier. He had built other signs for Griffith in the past. Hi-Glo operated until the outbreak of World War II. Neon transformers were deemed non essential for the war effort. He ultimately sold the company to H.L. Cox of Amarillo and joined the See Bees to fight in the pacific. After the war he opened Tesco Neon signs in Roswell and continued to manufacture theater marquees and other signs throughout New Mexico and Texas.