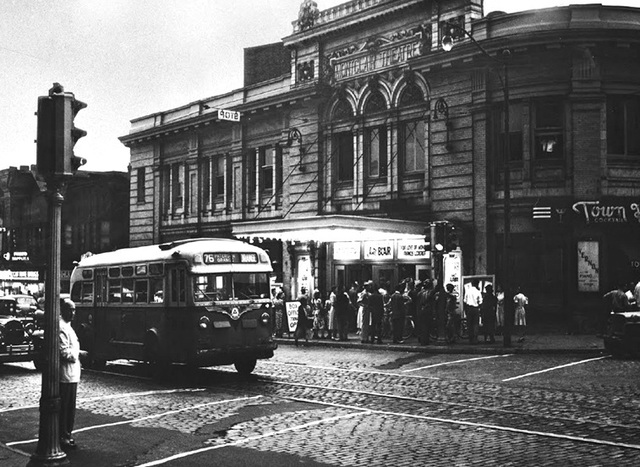 This theatre began as a silent era theatre. It was operating from at least December 28, 1918. It is listed as closed in the 1941 Film Daily Yearbook, when it had been operated by Warner Bros. Circuit Management Corp.

I’ve got some memories of the Montclair Theater that will stay with me until dementia sets in, and maybe beyond.

When I was a little kid in the ‘40s, I’m pretty sure that the theater was closed, unless it opened for the occasional benefit like the one for Our Lady of Mt. Carmel church. But in the late '40s or very early 50’s it reopened for at least one run of one play, and it was Diamond Lil with Mae West. My father was a serious amateur actor, and somehow he and my mom wangled lengthy on-stage non-speaking parts. Because they were in the show, they got me backstage and introduced me to Mae West and a female impersonator named Ray Bourbon. Ray had just taken off his wig, and the sight made a permanent impression on me! Diamond Lil went on to Broadway, and my mom and dad were invited to play their roles again for a single performance.

The theater closed after that, but around 1954 we were surprised to find out that it was re-opening as a summer theater under the direction of Harold J. Kennedy (the author of “No Pickle, No Performance”). I was all of 13, but I wanted some kind of summer job, so my dad suggested I go down to the theater and see if they were hiring. The box office people were very nice and invited me to talk to the set designer, Charlie Baker. Charlie hired me on the spot and within minutes had me high on a scaffolding me painting scenery. they couldn’t pay me, but I was happy….I had a job!

A few days later my younger brother showed up to see what I was up to, and Charlie put him to work too.

After we painted for a few weeks, we branched out into other areas such as: usher (50 cents a performance plus tips), stage hand, and prop acquisitioner. This was the big time now. I remember the theater renting an old truck and sending three of us down to the Ballantine brewery in Newark where we picked up a bar, bar stools, neon signs, and a jukebox from their warehouse. They were to be used in a local (non-touring) production of “Anna Lucasta” with Lillian Roth. My brother and I worked on setting up the bar during an intermission, then getting up on a scaffold so we could throw styrofoam snow on the actors as they came to the door of the bar. We loved that, and threw great handfuls of the stuff as hard as we could. The theater didn’t have a lot of money, so at the end of the two week run the snow was a darkish gray, kind of like the real stuff after an hour on the ground in New York.

I remember two of the songs they played when the juke box was supposed to come on…..Bill Haley’s Rock around the Clock, and Johnny Maddox’s GladRag Doll. Very contemporary.

One memorable show was “Oh Men! Oh, Women!” with Franchot Tone, Dana Elcar, Betsy von Furstenburg, and Patrick O'Neal (who was “with” von Furstenburg at the time). One day we were sitting in on a rehearsal when Betsy threw a tantrun and tossed her dilute coke syrup (which was used as fake booze) on the sofa that we had borrowed for use as a stage prop from La Reine Furniture down the street. It made a nasty brown stain that we could not get out, so we just put a throw on it. After the show moved on, guess who got the job of returning the sofa? Right. My brother and me. The store owner taught us a few new words that day.

One day Franchot Tone asked me to run to the cleaners and pick up his suit for that night’s performance. I went on my bike, and on the way back, holding the suit with one hand, I didn’t realize it, but one of the sleeves went between the fork and the front wheel. I was aghast at the black grease that the spokes left on it. I knew I couldn’t let Tone see it in that condition, so I ran to Cohen’s across the street and bought a can of lighter fluid. I worked for an hour on it, and got it pretty clean. By the time I gave it to him it had dried, and you really had to look hard to see the evidence. He never said a word.

Other well-known performers came through that summer, and I got autographs from them all. Basil Rathbone (signed the book upside down) Butterfly McQueen (had an old woody station wagon that she called “Hecubah”), Mark Miller (had an old Packard that we helped him polish), Sarah Churchill (Winston’s daughter), Constance Bennett, and several others. I never saw them again withone exception. I kept running into Patrick O'Neal, and he remembered that summer well. The last time I saw him was at a rally in Chicago for Eugene McCarthy in 1968. Everyone was drinking freely and he and I reminisced about that summer one more time.

I recall that the theater building once had a cocktail lounge right at the corner of Valley Rd. and Bloomfield Ave., but I think it closed after Diamond Lil closed, and was actually housed an imported car dealer, Kingsfield Motors, for a while.

After my summer there, the theater closed, and I believe it was for good. A few years later it was torn down to make room for a parking lot. Harold J. Kennedy went on to produce shows at the Grist Mill Playhouse in Andover NJ. I was sure he was dead, but a few years ago I was having Sunday brunch with my family at a place in Greenwich Village, and as I was leaving the men’s room, Kennedy walked in. He was quite old and he didn’t appear to be in a mood to talk. And I was sure he wouldn’t have a clue as to who I was anyway, so I just pointed him out to my brother and let it pass.

My wife finds all this history fascinating, but does anyone else??

I grew up in Montclair in the sixties, and just found a slightly different copy of this postcard at a yard sale in my little village in the Catskill Mountains. Mine was mailed in August of 1916.

The online collection of the Montclair Public Library has a a copy of this postcard. It’s so badly scanned that I can’t tell if it it is the same copy as the one linked above, but I think it is the same. They give the address as being 634 Bloomfield Avenue, Montclair. That puts it at the southeast corner of the intersection of Bloomfield Avenue and Valley Road. I think there may still be a parking lot there, or at least was until fairly recently.

Cohen’s finally closed a couple of years ago, I think. In an era of corner stores that are corporate clones, up until the end it was still the way it had been for decades.

CarolM: Thanks for the tip on the library. The address that you list appears to be correct. Here are some photos:

Thanks for solving a mystery for me ! Always wanted to know where Mae played in Montclair !

On this site was the Mansion House, renamed from the West Bloomfield Hotel after a remodelling the late 1800s. It was razed and the Montclair Theatre opened on the site in 1913. It was the town’s first theatre and held concerts, plays, silent movies and later talkies. The asbestos curtain portrayed a 1913 scene of Bloomfield Avenue. The theatre was razed in the early 1950s. The debris was used as fill for the basement space. A parking lot does indeed occupy this site. Settling of the theatre fill caused the lot to sink. During reconstruction in 1997 one could see remains of the theatre.
source – Images of America: Montclair, pages 77 & 84

Jay Phelan-Well I’m all the way over in Manteno (south of Chicago) Illinois, and I found your story most interesting!

A Mighty WurliTzer Theater Pipe Organ, Opus 6, a 3 Manual/13 Rank was shipped to the Century Theater in New York, New York in 1912. It was then sold to the Montclair Theater. The Montclair Theater then sold it to the Wellmont Theater also in Montclair, New Jersey. It is thought to have been junked? If you know anything about the organ please email us!

Jay Phelan: I really loved your stories. You made all those actors come alive for us. Thanks!

Was this the first movie theater ever built in Montclair?

Architected by William H. McElfatrick and opened in 1913