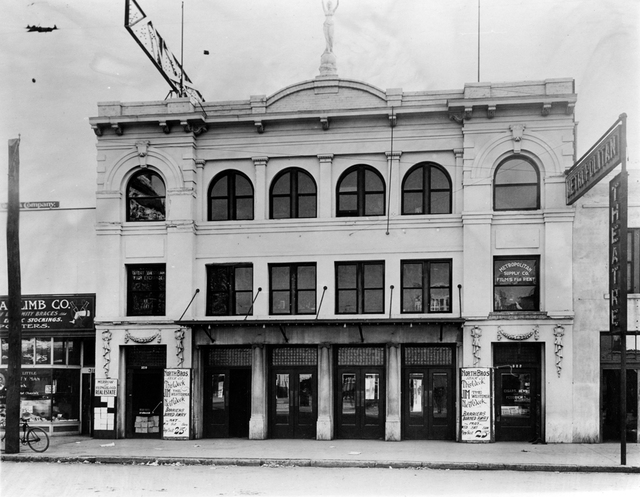 Pre-opening news announcements mentioned that the Metropolitan Theatre was in Federal (Colonial) Revival Style, designed by architect and producer Frank William Sanger, and went on to say that Sanger had also had the Empire Theatre and Broadway Theatre in New York City’s Times Square district.

Nice view of Lady Liberty atop the Met in that 1912 picutre!

This antique color picture postcard (when this house was still known as Metropolitan) comes courtesy of Doug Loudenback and his fantastic link. On either side of the theatre remained traces of the old west.
View link

That is a nice shot Cosmic.

Modern civilization was quickly taking over OKC’s old west look. To see a 1913 view of the Metropolitan Theatre and roof sign on Grand Ave. off Harvey St. (photo ID mistakingly listed this view as Main St) go to this link and type in “miller bros department store"
View link

1911 photo when this theatre was still known as Metropolitan,
View link

The RKO Palace was actually at 320 W. Sheridan Avenue (which was called Grand Avenue when the house opened.) The number 322 can be seen on the door to the upstairs offices at right in the 1911 photo missmelbatoast linked to.

Though the Metropolitan began presenting vaudeville at the end of March, 1909, the house had opened on January 28 with a stock company. The January 29 issue of Oklahoma State Labor News published an item about the opening.

The February 21, 1909, issue of the Oklahoma City Daily Pointer featured a large ad for the Metropolitan Theatre with, just below it, a photo of the Metropolitan Stock Company’s leading man, Hayden Stevenson.

Given the later troubles the theater had with labor organizations (in 1929, when it was theonly non-union theater in Oklahoma City, it was damaged by a bomb during a dispute with the projectionists and stage hands unions) this item from the October 29, 1910, issue of The Oklahoma Labor Unit is a bit ironic. It recommends a play called Lost Paradise to union members, noting that the producers, the North Brothers Stock Company, had made a sizable contribution to the Labor Temple fund. “The Metropolitan is fair to union labor,” it said, “and for this reason has always been liberally patronized by union people….”

1911 Pic added to Photo Section of the original Metropolitan Theater prior to becoming RKO Palace. 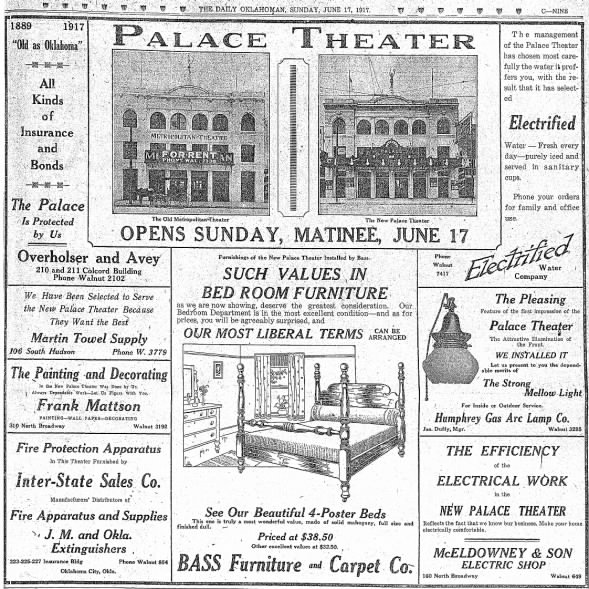