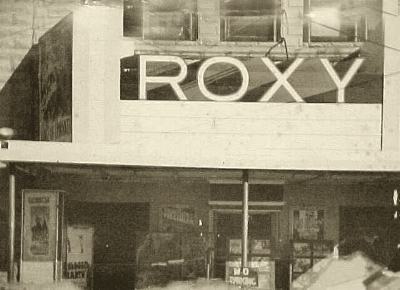 Close study of these photographs indicate that perhaps signage from the Plaza were later moved over to the Roxy. Notice that the Roxy and 1960 Plaza exterior pictures have the same rough quarried stone exterior and matching upper story windows.

The Mystic theater of Picher, owned by J. D. Wineland since 1918, has been purchased by the Consolidated Theaters of Oklahoma, who are also the owners of the Plaza and Roxy theaters here. The Mystic will be closed for about 15 days to be re-decorated and for the installation of new equipment.

The Mystic will be managed by Jim Worsley, who is also manager of the Plaza and the Roxy. Wineland, who has apartments over the theater, moved to Joplin yesterday. He has announced no future business plans.

These LIFE photographs indicate that when the Plaza Theatre was condemned in 1950 all signage was moved over to the Roxy;
View link
and,
View link

This item about the Roxy Theatre is from the Sunday, May 1, 1932, issue of the Miami Daily News-Record:

“The Roxy theater was opened in Picher Saturday night by Carl Gordon, well known former theater man of the district, in the building formerly occupied by the Gayety theater at 211 South Main street. The new theater quarters have been enlarged and extensively improved. Equipment includes talking picture facilities of the Western Electric company. The theater has a seating capacity of approximately 500. Mr. Gordon has announced that it will be his policy to give the theatergoing public of Picher and vicinity a thoroughly modern playhouse with strictly modern prices.”

Picher had a movie house called the Gayety Theatre at least as early as 1921.

The Humphries Bros. (John and H.N.) launched the New Royal Theatre opened on March 20, 1920 with motion pictures beginning with Blanche Sweet in “Fighting Cressy.” It was located on the town’s former Main Street (later known as Connell Street and Highway 69). After two ownership changes in a year and a half, new operator, J.W. Cotter – formerly of the Picher Theatre – took on the venue in November of 1921 closing it for a refresh. It re-emerged as the new Gayety Theatre launching on January 1, 1922 switching its format to full time vaudeville. In 1923, the theatre switched back to a policy of mostly motion pictures getting the Paramount contract and its fifth operator. The theatre found a sixth operator in 1928 but the Gayety closed as a silent operation in 1929.

Carl Gordon took on the venue giving it a Western Electric sound system and relaunching on April 30, 1932 as the new Roxy Theatre. The town’s fortunes largely rested on the Eagle-Picher Mining and Smelting Company. Unfortunately, a mine shutdown led to economic hardship. Video Independent Theatres, which had taken on the location, closed the Roxy in July of 1949. That left the theatre with the much larger Plaza Theatre (former Mystic Theatre) as its only theatre.

When the Plaza was closed as part of the condemnation zone identified in February of 1950 as the city feared a major cave-in at the mine, there was some consideration of moving the Plaza to the former Roxy. However, that was quickly dismissed as the Roxy, too, was within the condemnation area. The Plaza would find a new home a block away on the opposite side of the street later in 1950. Plaza #2 would join Plaza #1 in burning down while the Roxy was torn down due to the potential of a cave-in.