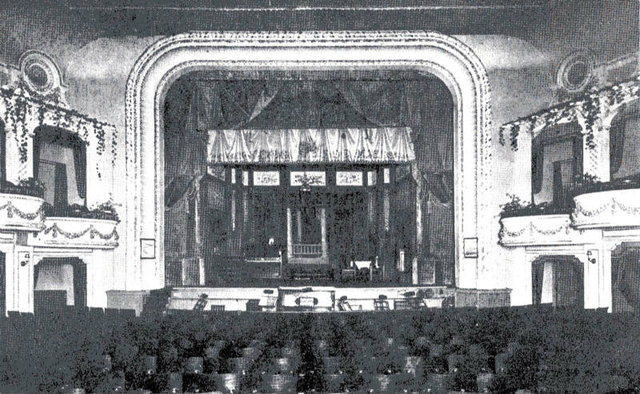 After being closed for several years, the Englert Theatre was renovated and restored and is in use as a live theatre.

In response to Paul W. I asked the historian at Iowa State Historic Preservation Office re. proof of the architects-his response was that local newspapers identified the architects (no citation offered of course-but not based on plans). It is certainly possible, they were doing smaller commissions at that time.

I am interested in proving that the Capitol Theatre/Kahl Building in Davenport, Iowa, is the oldest intact large-scale example of R&R’s democratic theatre design, that which became their standard design (no boxes, rounded stage front with side stages).

Could you elaborate more on what Rapp & Rapp’s “democratic theatre design” was? I assume you mean no elitist boxes? According to my ongoing research the only surviving early Rapp & Rapp designs built before 1920 are

George Rapp himself stated the firm’s design philosophy:
“Watch the eyes of a child as it enters the portals of our great theatres and treads the pathway into fairyland. Watch the bright light in the eyes of the tired shopgirl who hurries noiselessly over carpets and sighs with satisfaction as she walks amid furnishings that once delighted the hearts of queens. See the toil-worn father whose dreams have never come true, and look inside his heart as he finds strength and rest within the theatre. There you have the answer to why motion picture theatres are so palatial. Here is a shrine to democracy where there are no privileged patrons. The wealthy rub elbows with the poor — and are better for this contact. Do not wonder, then, at the touches of Italian Renaissance, executed in glazed polychrome terra cotta, or at the lobbies and foyers adorned with replicas of precious masterpieces of another world, or at the imported marble wainscoting or the richly ornamented ceilings with motifs copied from master touches of Germany, France, and Italy, or at the carved niches, the cloistered arcades, the depthless mirrors, and the great sweeping staircases. These are not impractical attempts at showing off. These are part of a celestial city — cavern of many-colored jewels, where iridescent lights and luxurious fittings heighten the expectations of pleasure. It is richness unabashed, but richness with a reason.”

This is the famous quote-there were NO boxes of any sort, resulting in a classless democratic experience for every attendee. Here is the early list of their works (my focus was there along with what they did in Iowa-all related to putting the Davenport Capitol into some context:

This design team is credited with over 400 theatre designs nationwide. There is no way to know if this translates into full-scale new designs or re-designs (Garrick Theatre, Chicago, 1930s). Rapp & Rapp partnered with other architects when a theatre was a part of a larger building. In one instance they designed a roof-top dance garden along with their theatre (Saxeâ€™s Wisconsin, Milwaukee, 1924, non-extant). Commonly, artists or artist/architects were brought in to do the actual ornamentation or at least the artwork. Ninety-three of these are identified and almost all of these are sufficiently documented (number of seats, historical name, year of construction-usually opening year, style). This list is chronological. Fourteen of the pre-1921 designs were in Illinois, mostly Chicago where the firm was based. During this period single commissions were secured in Oklahoma, Minnesota, while there were three in Iowa and two in Wisconsin and Ohio. Their last project (the firm continued in existence) dates to 1937. The firm did a number of atmospheric theatre designs as well but at least one was actually done by another partner architect, their designs included Gateway Theatre, Chicago (1930-extant) and Toledo Paramount, 1929 is non-extant. Thirty-four theaters, of about the same size (or larger) as the Capitol, were built between 1920 and 1937. Fifteen of these have been demolished or have lost their original interiors. Add the three other pre-1921 designs in this same size category, and the Capitol is one of a total of 37 R&R designs, 16 of which have been lost.

I am looking for any secondary source treatment of the Rapp’s, C. W. Rapp died in 1926 so I am of the opinion that their really significant work pre-dated that brother’s death—of course some other family members came into the firm and they turned to doing a few atmospheric theatre designs during the 1930s.

Pleased to get your response. I see your list lacks the Capitol. Let’s talk more.

Thanks for the comments and the list. I would like to converse further. I have a few early theatres that are not in your list including Madison, WI, Des Moines, Iowa, Fort Wayne, Indiana, Quincy, Illinois and a few others that I know existed but haven’t been able to find out about yet. Please email me at the address below.

Here is a 1940 photo of the Englert Theater with additional information. “Balalaika” with Nelson Eddy and Ilona Massey is the then current attraction on the marquee.
http://www.shorpy.com/node/2177?size=_original

Here’s an article confirming that the Englert was designed by Rapp and Rapp.

“Iowa City’s new opera house my cost, complete, and ready for opening for the season of 1912-1913, in the neighborhood of $55,000. W. H. Enlgert, the owner, is to leave for Chicago in the morning, and he will there inspect the plans, designed by Rapp & Rapp, the architects. The Rapps telegraphed Mr. Englert to come today. He will find the plans, they say, completed in pencil, and he will approve them, or suggest changes, before they are transferred to blue prints. With the latter action, the time for calling on contractors to prepare the bids will be at hand. The contract will be duly let, and the work of building the new theatre will be begun as soon as possible, the coming spring. The building in its entirety, will occupy 63 by 150 feet, and the theatre, proper, will be 80 by 62. A lobby in the center will lead to the playhouse while stores will be on either side. The building will be three stories high. Details as to the material, pressed brick, stone, etc. will be decided later. The first floor will be devoted to the theatre and store rooms, the second to offices, and the third to living apartments. The building will occupy the present site of the Graham barn. The playhouse will seat between 1,000 and 1,100 people, and the best class of plays in the country, it is hoped will be secured. Everything will be made thoroughly modern, in the way of seating equipment; scenery; acoustics; etc.; and the patrons of the house are likely to get the highest class of dramatic attractions presented in splendid shape, under most alluring conditions.”

Here is another photo:
http://tinyurl.com/yebuldy

The Englert is open as a live theatre.

The May 27, 1926, issue of The Daily Iowan, the University of Iowa’s student newspaper, had an article saying that the contracts had been let for construction of the new Englert Theatre. It said that the new house would have 190 more seats than the old one, and the stage would also be larger. The new building was ten feet winder than the original theater. The furnishings for the theater would be installed by A. H. Blank, the Des Moines company that had the lease on the new house. Blank was the regional Paramount affiliate.

The article also said that the architectural style of the new theater would be Gothic. As the facade is not at all Gothic the style was probably used only on the interior. The extra ten feet of width probably applied only to the auditorium. Most likely the original auditorium had outdoor passages at each side for emergency exit (a fairly common feature for many older theaters, especially those built within a few years after the disaster at the Iroquois Theatre in Chicago in 1903) and that space was probably built over.

The Englert was a beautiful theatre that played many of the biggest films of the time. I dont know the exact date but somewhere around 1983-84 they split it in two. They had planned to split main floor and balcony to make 4 screens. But they decided not to because they would have to put in an elevator for disabled patrons to get into upper auditoriums. So they made 2 screens each with a main floor and a balcony.