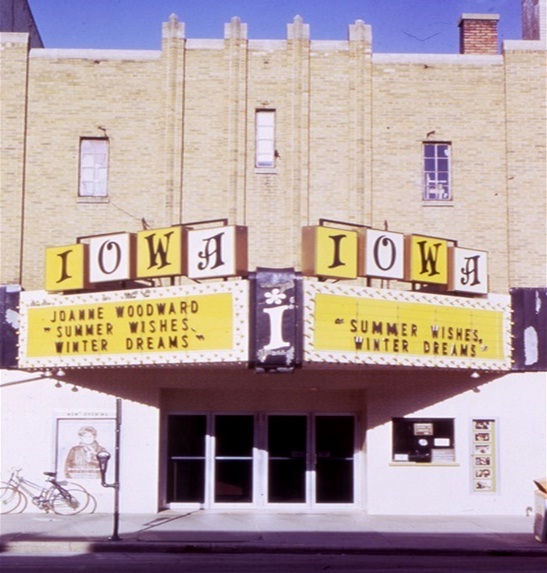 The Iowa Theatre was located on S. Dubuque Street at E. Washington Street. The building is still in use and it is very evident that it was a theatre from the photos. The theatre is now a night club called Dc’s.

Everybody must get stoned. From the Iowa City Press-Citizen in March 1971:

Charges “quite possibly” will be filed in connection with a fracas that broke out after officers halted a movie at the Iowa Theater here Friday afternoon. The scuffle resulted as police tried to drag a member of the audience, Donald Pugsley, 23, out of the theater after officers ordered movie patrons out of the building, searched them and readmitted them. The policemen were responding to a report that members of the audience were smoking marijuana during the Rolling Stones movie “Gimme Shelter.” Pugsley said that after the audience was readmitted, an officer told the young people they would be permitted to stay for the rest of the movie, “except that loudmouth.”

Pngsley said the officers “grabbed me and dragged me up the aisle, kicking me all the way.” “I’ve got a bad leg. I just had a pin taken out and didn’t want them to open the old surgery. I started screaming and the crowd got quite excited,” said Pugsley, who suffered a leg wound in Vietnam.

Police Sgt. Robert Vevera, who was called to the scene about 3:30 p.m., said the inside of the theater was “pretty smoky” because “some individuals in the audience were smoking marijuana.” The movie was halted, the lights turned on and Vevera formed the audience “they were violating a city ordinance and state law” against smoking in theaters.

The audience was ordered outside and told “they would be readmitted if they gave up their cigarettes,” said Vevera. Police confiscated “quite a few of both” tobacco and marijuana cigarettes, the officer said. Pugsley said that as the police were searching members of the audience, “I was being pretty verbal with a cop. He pushed me up against a wall and said, ‘shut up or there’ll be trouble.”’ Pugsley said that he obeyed the officer’s order and that he was grabbed inside the theater after another member of the audience shouted at an officer. According to Vevera, Pugsley was released because of the ‘physical impossibility of getiing him out of there without hurting someone. “If we felt the crime was bad enough, we could have used a club or mace But this wasn’t a murder or anything.”

Vevera said he was treated at University Hospital for a torn knee he received in the scuffle. Another officer’s watch was stolen during the incident.

As a manager trainee I worked here from 1983-84. It was a neat old theatre but very run down. Money wasn’t put into it because it made little if any profit. It was not used for any big blockbuster films.As I remember at that time it often closed during the summer when students were out of town(?).It had a small lobby with a tiny concession stand and the tickets were sold thru a window onto the outside. Around that time someone offered to buy the place and central states theatres agreed to sell. It was demolished and replaced by a Burger King. When it sold I was able to take some seats out of it and had permission to take the I O W A letters off the marquee. I tried to get the letters out but we had sleet and ice and they were frozen in place.