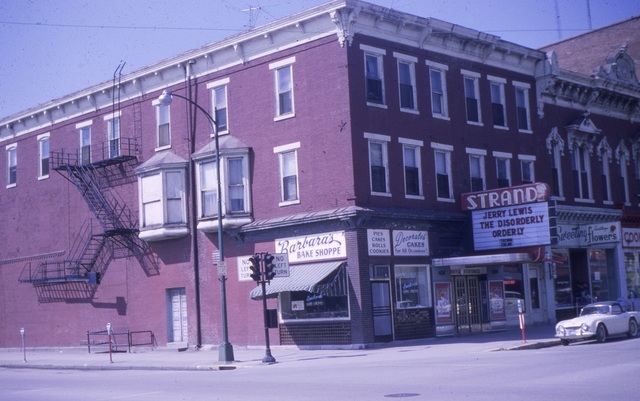 The Strand Theater was opened April 19, 1919 with Douglas Fairbanks in “Hi Picture in the Papers”. It was closed February 1, 1968 with Audrey Hepburn in “Wait Until Dark”. It was demolished and replaced with an office building after a fire on February 1, 1968.

The April 19, 1916, issue of The Iowa City Citizen said that the new Strand Theatre on College Street would open the following day. The building, formerly a saloon, had been remodeled for Thomas A. Brown, who had operated the first movie theater in Iowa City.

The advertisement for the Strand Theatre in the May 27, 1926, issue of The Daily Iowan boasted of the theater’s Robert Morton theater organ.

The marquee is about all that can be seen of the Strand in this photo. The movie In Old Arizona, the first talking picture to be filmed outdoors, and the first western with sound, was released in January, 1929.

First film was Douglas Fairbanks' “His Picture in the Papers” on April 19, 1916 and final more than 50 years later was “Wait Until Dark” on February 1, 1968. That’s the day fire broke out on the third floor of the Strand Theatre Building with the patrons safely evacuated. But that was it as just months later, the building was demolished and replaced by a Sambo’s Restaurant within the three-story Braverman Building that replaced the 52 year old Strand.

I remember going to this theatre as a child. I believe it showed a lot of children films such as disney films. I was 13 when the fire closed it.