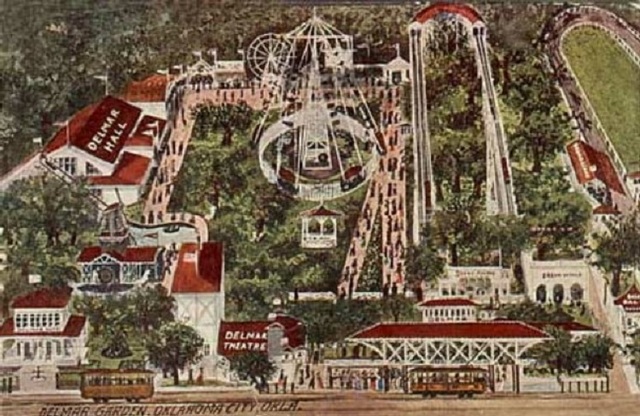 Athel Boiter, a sweetheart of a man who was a film booker knowledgeable in theater lore, once told me the history of Delmar Garden Theater.

Mr. Boiter said that John Sinopoulo was a Greek immigrant who wanted to build a stylish amusement complex that held a uniting theme throughout a park setting. In 1902 Sinopoulo opened on the banks of the North Canadian River his Delmar Gardens Amusement Park, which was designed in elaborate Art Nouveau styling that blended blissfully with surrounding wooded acreage.

Built to be a vaudeville house, Delmar Garden Theater also installed film equipment in 1903 to feature “The Great Train Robbery”, which ran for eleven weeks. Regardless of the fact that film showings at the Delmar proved to be successful, management preferred to continue mainly as a two-a-day vaudeville venue, with only an occasional movie thrown in at the end of a weak vaudeville program. (One advantage for vaudvillians appearing on the family oriented Delmar stage was that they could also present “adult material” in late night sketches at the Delmar Saloon).

Lon Chaney, Sr. was appearing at Delmar Theater in 1905 when he rescued a beautiful 16 year-old songbird from a flooded basement dressing room. Her name was Cleva Crieghton, and after a whirlwind courtship the couple married there in Oklahoma City, but whether or not they took advantage of the romantic Delmar Garden floating chapel is lost to time.

Back in those early days, every spring the North Canadian River overflowed its banks causing extensive water damage to Delmar Gardens Park. Flooding was the reason for an early demise of this lovely pleasuredome. It closed in 1910, and was razed the following year.

During the early 1930’s the mission revival style Market Theatre (also 3000 seats) was built on the Delmar site. Though now an antique mall, the boxoffice lobby, balcony, and stage remain intact.

GREAT NEWS!
Renovation of Market Theatre has now begun at an estimated redevelopment cost of $4,000,000. This theatre opened June 16, 1928, at an original construction total of $500,000.
Click below to explore free web pages containing a complete history and professional color photographs;

Further contemporary and vintage photos can be seen on the below link;
http://www.okcfarmersmarket.com

Some more recent photos of the Market Theater:
View link

Architect William A. Wells designed the Delmar Garden Theatre, and most all buildings within the park.
View link

311 South Klein Avenue, Oklahoma City, OK 73102 is the exact address for this listing