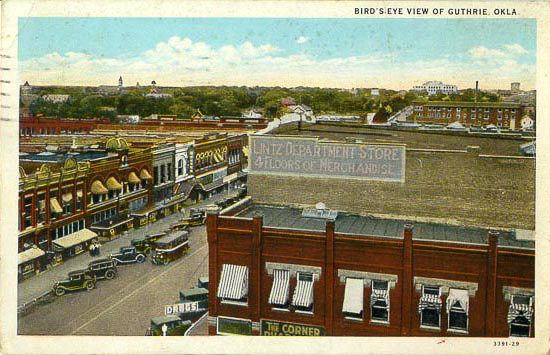 Here is an interesting image of early day Guthrie, Oklahoma, with a pretty nickelodeon in the background. The Gem Theatre was opened by 1912. On July 22, 1926 it was renamed Pedigo Theatre. In October 1927 it was renamed State Theatre. Closed as a movie theatre in the early-1950’s, it presented live performances which ended in January 1958.

In this antique color postcard, left of Lintz Department Store wall sign, can be seen a white structure that is most likely the same nickelodeon in the above photo. Notice the same type arched marquee and theatre style upright sign.
View link

It is doubtful that Guthrie Nickelodeon and Highland Theatre were one and the same. The building where the nickelodeon stood still stands today and architectural accents don’t match the Highland image.

Without question the Tilghman, Guthrie, and Highland were three seperate movie houses. Both the Tilghman and Guthrie nickelodeons were located on opposite ends of Oklahoma Ave. The Highland Theatre sat on Harrison.

These vintage photos tell a lot, and prove that the Highland was a seperated movie house. Official name of this cinema was State Theater. In the auditorium view notice the most unusual seating arrangement!
To look at images type in word ‘theatre’ -
View link

According to Bowers' “Encyclopedia” page 551, there was a Reproduco organ made by the Operators Piano Co. owned by an “A.R. Powell” of Guthrie, presumably a theatre owner. I could not find a page for him, so I am putting this here for the time being.

Also, according to further information on the sane site listed above, this theatre was last known as the Pedigo Theatre,
http://www.roadsideoklahoma.com/node/1695

Now home to Mark’s Drugs, this is what the former State (AKA-Pedigo) Theatre looks like these days,
View link

According to the trade press, Ned Pedigo operated the Highland and the Pollard Theatre in Guthrie and his entry into the theatre business pre-dated silent films. But he decided in 1926 to create an improved theatre to properly display feature films including Simplex projectors and Da-Lite screens. The Pedigo launched July 22, 1926 with “The Bat” starring George Beranger. The building had previously been home to a mortician.

In October of 1927, Pedigo sold the theatre becoming the State Theatre. On April 12, 1928, Griffith Amusement took on the venue as its fourth operator and wired it for sound. Pedigo would re-emerge taking on the Guthrie Theatre – his first sound theatre – in 1932.

After holding one final live event in January of 1958 long after movies had stopped there, City Drug took over the State converting it to retail.