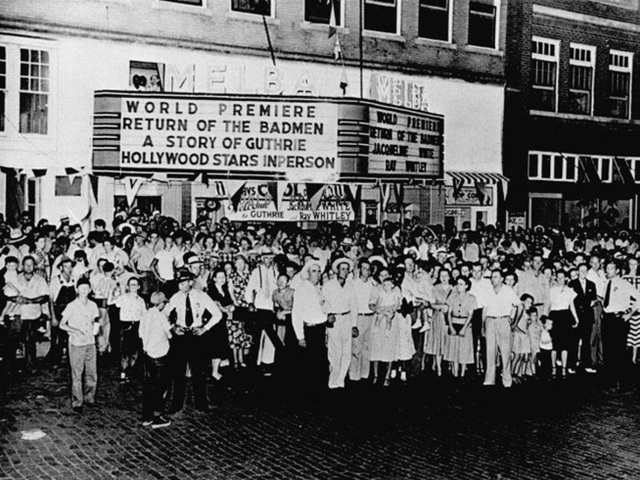 Built in 1901 of brick and native stone it was originally the home to Patterson Furniture and a funeral parlor. In 1919 it was purchased by George Pollard and converted to a vaudeville house.

In 1926 Mr. Pollard leased the building to A.R. Powell who played vaudeville and silent films until 1929. In 1929 with the coming of talkies Mr. Powell remodeled the building adding a large stage, hand painted wall murals, equipped the theatre for sound pictures, and put seating in for 800. At this time it was given the new name Melba.

The Powell family operated the theatre until 1986. Then in 1986 it went through a $620,000 renovation enlarging the stage area, preserving and restoring the wall murals, installed new seats, a new stage hoist system and redoing the lobby and wrought iron chandeliers.

OVER 10 YEARS AGO, I WAS A MANAGER OF A VIDEO STORE. THE FATHER OF THE OWNERS WIFE WAS A FRIEND OF MR. POWELL WHO OWNED THE POLLARD. THE STORY THAT CAME BACK TO ME: THERE WAS A HUMPHREY BOGARD MOVIE PREMEIER AT THE POLLARD. I’VE NEVER BEEN ABLE TO FIND OUT IF THIS IS TRUE, AND IS SO, WHICH MOVIE IT MAY HAVE BEEN. I’VE OFTEN THOUGHT THAT IT MIGHT BE “THE OKLAHOMA KID” WHICH WAS A JAMES CAGNEY MOVIE WITH BOGART IN THE CAST. DOES ANYONE KNOW? RICK

Dear LL:
This Guthrie movie premiere story is true. Warner Bros brought their big stars to Guthrie to promote this picture. A horse drawn stage-coach picked celebrities up at the depot. It may have been “OKLAHOMA KID”, but I’m not sure.

Contact Dr. Blackburn at the Oklahoma State Historical Society for further details, and photos of the event. Also, Guthrie Public Library Archives has material on this subject.

Exterior of the Pollard Bldg was designed by Joseph Foucart, a renouned French architect from Paris. Foucart migrated to Indian Territory to get a fresh start, participated in the Great Land Run of 1889, and set up practice in Guthrie.

November, 1988, issue of Oklahoma Today Magazine has a contemporary write-up about the Pollard, but no architectural photos.
View link

On this site are vintage exterior shots, and a rare view of the handsome auditorium …
View link

Oh yes, to view images on above post type in name “Melba”!

Modern images and a history on the Pollard Theatre can be found on this site;
http://www.roadsideoklahoma.com/node/385

History of the Pollard from it’s official website includes 3 photos.