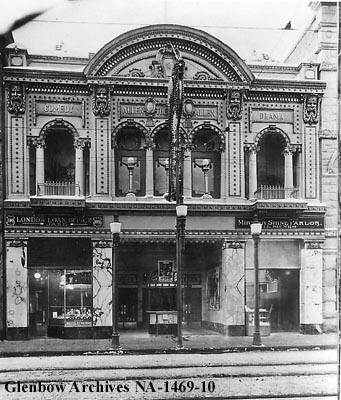 Original chain was the Allen Theatres chain, later taken over by Famous Players.

The first manager was a Mr. Milligan. The HillGreene Lane organ was a miniature duplicate of the organ at the Mormon Tabernacle in Salt Lake City. The cost of the organ was $15,000.

The Allen Theatre was opened on November 15, 1913 and was built at the cost of $125,000. It was said to be the most magnificent theatre on the North American continent that was devoted exclusively to motion pictures.

The decorator was Otto Huber whose firm was based in Chicago.

The color scheme was in rose and gold with red velour seats.

The Allen Theatre was renamed the Strand Theatre on March 1, 1924.

Had the distinct pleasure of working at that Cinema in 1970, when it was a B Picture House, i was one of the Projectionists working with Art Anderson at that time, and shared the booth with him, from what i remember it had Simplex XL Projectors with Peerless Carbon ‘arc Lamphouses. I do not remember the amps as of this writing, It was quite a job of revising the films there as they were changed twice a week with double billing.. Still remember paying the Wild Bunch there. Great movie.

When I first moved to Calgary as a kid in 1972, the Strand was still standing, but was closed and awaiting the wrecker’s ball. I walked by it once and vandals had torn away the frame-like showcases where the posters used to be. One of them still had a matte that had been behind another matte for years. It had bits and pieces of a poster for King Solomon’s Mines (1950). The theater was gone by the end of 1972.

Trade journal The Moving Picture World reported in its issue of December 27, 1913, that the Allen Theatre in Calgary had opened on November 14. The December 6, 1919, issue of the same publication had an article about the Strand’s sixth anniversary.

A couple of modern print sources I’ve seen give the theater’s opening year as 1911, but they are mistaken. Another modern source, probably more reliable, says that the Allens opened a film exchange in Calgary in 1911, so that event was probably what led to the erroneous year for the theater opening.

The HillGreene Lane organ is now in a church in Lethbridge

This opened as The Allen on November 15th, 1913. Grand opening ad in the photo section.

This was renamed Strand on March 1st, 1924 as the Allen chain goes bankrupt due to heavy losses at the Allen theatre in Cleveland, Ohio.