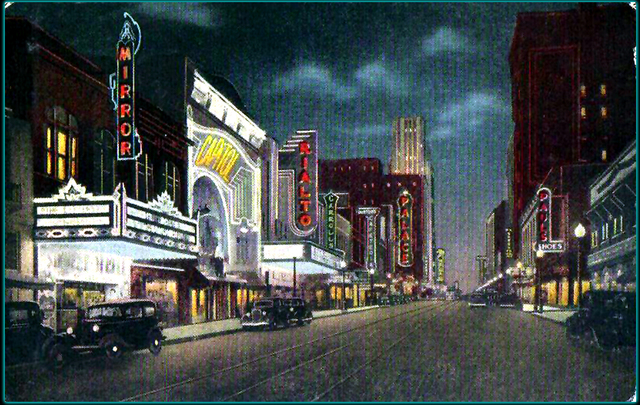 Opened on June 24, 1913 as Southern Enterprise’s Old Mill Theatre, operated by the Dalton brothers. The exterior was 3 storys high and faced in red brick. It was flanked by two tall towers, resembling windmills, with large shuttered wheel fans topping them.

Remodeled in a plain style in 1935, it was renamed Rialto Theatre and by 1941 it was operated by Paramount pictures Inc. through their subsidiary Hoblitzelle & O'Donnell. It was closed in 1959 by the Interstate Theatres Inc. and was demolished in 1960.

1960â€"torn down along with Rialto and Capitol, the same year for parking lots.

A photo of The Rialto Theatre from 1958
View link

A photo of the Rialto Theatre from 1954
View link

A theater identified as The Rialto from 1930
View link

Vintage postcard views of the Rialto Theatre here and here.

An old movie theater ad from 1949 for the Rialto Theatre.

From 1933, a post card view of the original Old Mill Theatre before it became the Rialto. Also visible are the Mirror, Capitol and Palace.

The Old Mill is discussed in this 1915 edition of Moving Picture World:
http://tinyurl.com/yb4mex6

From the 1930s a postcard view of the Rialto Theatre on Theater Row in Dallas.

The original Rialto Theater was located at 410 N. Bishop in Oak Cliff and it opened as part of the Ed Foy Neighborhood Theatres circuit in 1919. After a second renaming, it became the Astor Theater in 1934. Dallas didn’t go for long without a Rialto though and this entry is for the Old Mill Theater which opened June 24, 1913 for the Southern Enterprise Circuit. The Old Mill had giant fans at the front which was its cooling system and the theater was architected by I.A. Walker with 1,874 seats.

On October 25, 1928 the Old Mill finally installed a sound system choosing Vitaphone and Movietone. It narrowly beat the Capitol by one month as the last regular major downtown movie theater to install sound. The Mill’s first soundie was “Midnight Taxi” using Vitaphone.

In 1933, Interstate took over much of the Southern Enterprise circuit ultimately adding the Old Mill to its portfolio. Interstate decided to spend $42,000 to modernize the Old Mill. It would keep the walls of the theater and rebuild a new theater and front. The final picture to play the Old Mill was on May 4th, 1935 with “The Florentine Dagger.” That was followed by a five-month rebuilding project.

On Sept. 14, 1935, the theater opened as The Rialto with “Annapolis Farewell”. La Roche & Dahl architected the modernistic streamlined look which was a marked departure from the Old Mill predecessor. Live radio coverage by WRR radio and a special appearance by actor James Dunn along with fireworks added to the festivities. RCA Photophone equipment and 1,500 new U-16 floating comfort theater chairs helped give the feel of a brand new theater. The programming was lesser run films and second-run fare.

Louis Novy’s Trans-Texas Theaters took on the Rialto and Capitol as part of the second phase of Interstate divestitures in the Paramount consent decree in 1953. They would also get the Varsity and Melba. Trans-Texas took over operations and closed the theater to install improved projection, sound, and a VistaVision screen. 1,500 new seats, new decor showed Trans-Texas' faith in the Rialto. It was positioned as a first-run theater after the Melba was dedicated to Cinerama for the immediate future. Its first program as the “new” Rialto was June 10, 1954 with “The Mad Magician” in 3-D. But the first run model wouldn’t last even to the end of the decade as Trans-Texas gave up the Rialto. By decade’s end two more new operators tried to revive the five-decade old theater. They tried second-run double-bills to no avail as the theater staggered to its final closure.

The Rialto lasted until March 23, 1959 before closing its doors. The final films played-a double feature of “Unwed Mother” and “Joy Ride.” The closure was rather quiet for a 45-plus year old fixture on theater row. The Rialto was scheduled for demolition along with the Capitol for a parking lot in 1959. But on May 20, 1959, the theater was engulfed in a major fire. The charred remains were removed. The Capitol was bulldozed and the next theater to go was the Strand early in 1960.

According to the Motography magazine for June 30th,1917 the Old Mill was destroyed by fire in February of that year, rebuilt and reopened later that year, with seating for 1,500, rich decorations, a vacuum fan system in the basement, a canary bird chorus and restrooms for ladies and gentlemen. All under the management of E H Hulsey.

1935 photo added via Jim Foster. Only photo that fully shows the newer facade. Capitol next door should be added to Nearby Theaters.