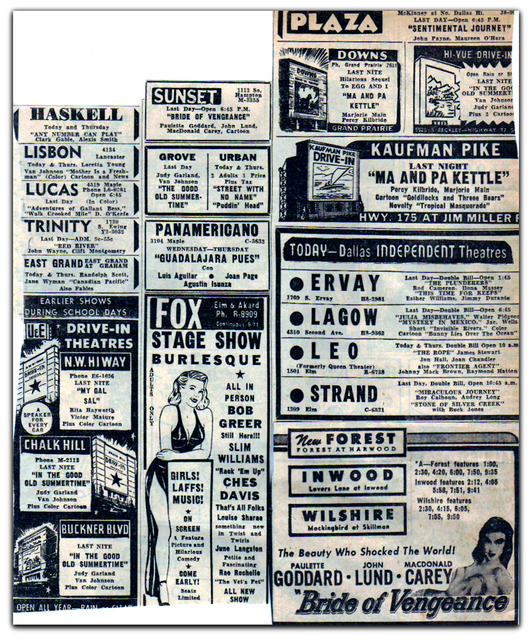 The name change came with a new owner and complete renovation in 1948. The September 18 issue of Boxoffice announced the reopening as the Leo and said that Joy Houck had bought the Queen early that year. Houck also operated the Strand Theatre nearby.

Don, I believe the date on that pic is about two years off, as the Leo was demo’d in 1953, according to a Dallas Times-Herald article covering the demo. I will try and locate that pic and post it if I can. This photo was obviously taken just prior to the razing, as the marquee is deteriorating.

BTW, even after its reopening as the Leo, with a big vertical sign stradling the marquee (already dismantled in this view), the new owners never covered up the old Queen sign painted on the west side of the building. Guess they figured everybody in Dallas at that time knew, so why cover it up?

An item in Boxoffice of October 5, 1940, said that E.H. Hulsey opened the Queen Theatre in Dallas in 1913. A May 10, 1947, Boxoffice piece about long-time theater man Lou Bissinger said that he had become the manager of the Queen three months after it had opened, and was still operating the house 34 years later. The Queen was located in a building that had been remodeled into a theater.

This is a photograph of the Leo Theater, with the vertical Leo sign over the marquee, from the Dallas Public Library’s Dallas/Texas History collection:
View link

The movie palace era that launched theater row in downtown Dallas started on Thanksgiving Day, 1912 with the opening of the Washington Theater. But the Washington was soon overshadowed by the far superior 800-seat Queen Theater by architect I.A. Walker. The $47,000 project was on the books in 1911 with Earl H. (“E.H.”) Hulsey converting an existing retail building at Elm and Akard with a five-year lease beginning in August of 1912.

The Queen opened to the public on January 24, 1913 at Elm and Akard with an over-capacity crowd which had its high expectations more than delivered. Commenters of the pre-Yelp era were astonished by the improved definition of the Queen’s projection described as “flickerless” machines projecting bright, sharp pictures on the wall. Reviews said of the Queen that it was the “most completely equipped and elegantly finished photo playhouses in the country.” Life-sized sculptures of Queen of Carthage, Queen Dido of Carthage and Queen Isabel of Spain along with Cleopatra were nice touches. Assigned seating with ushers was another. And a cigar parlor for those watching in the boxes showed class and spotlighted the theater’s fireproof construction. A $20,000 pipe organ with many special effects, grand piano and a six-person orchestra of “first-class musicians” accompanied the program which was upped to 12-person orchestra. William T. Street was brought in from London to play the pipe organ. And the management pledged to assure the “moral protection” of all children. The Queen was a hit.

The Queen was also in touch with its Dallas populace. The Queen produced some local moving pictures shot by manager E.V. Richards Jr. on the streets of Dallas and his first film’s storyline conveniently ended at the Queen Theater. That film was shown for four days in 1913 which was considered a success back in that era. Richards soon left and would run 200 theaters as general manager of Saenger Amusement. Just three months into the Queen’s operation, Louis Bissinger (known as Uncle Lou) took over managing the theater and the showmanship continued with little drop-off. The theater would become home to first-run silent Paramount and Realart Pictures before more stringent on booking procedures. The Theater’s tagline was “crowned with public favor.” The name of Queen Theaters was so popular in Dallas and around the country that an Oak Cliff Queen theater was opened called the Cliff Queen in 1915. Hulsey renewed for another five-year lease in August 1917 but a major fire on Sept. 27, 1917 caused $22,000 in damages and led to renovations to the theater including new fixtures, paintings, roof, and ticket booth, as well as a lawsuit about the actual damages to the building resolved seven years later.

In its tenth year, Uncle Lou and Joe Bissinger subleased the theater from Hulsey and it finally adopted a general admission seating policy instead of assigned seating as the theater began to slip in stature. Larger, more modern theaters had surpassed the Queen as Dallas' theater row matured along Elm Street. By October of 1926, the theater became a second run house with discount ticket pricing. The theater finally received sound equipment in 1930 and played “The Cock-Eyed World” as its first talkie using the Western Electric sound on film technology. Uncle Lou acquired the lease from operator Earl Hulsey’s estate in 1931 after Hulsey’s death. Lou Bissinger was recognized by The Variety Club of Texas which celebrated his 30th year of operating the Queen.

In post-War Dallas, the Queen was becoming decrepit and programmatically had lost distinctiveness. As freshly-built suburban theaters were being opened that would siphon audiences away from second-run and badly-aging facilities like the Queen, something had to be done. Uncle Lou was gone and the Queen Theater marquee came down in September of 1948 when after 35 years, the theater was renamed the Leo Theater under the Joy Houck circuit that also operated the Strand in Dallas. The Cliff-Queen carried the Queen’s moniker a year and a half beyond the original Queen for the city of Dallas. The former Queen now Leo was completely remodeled, renovated and playing to desegregated audiences. Though trying to find its footing as a family second-run house at the outset, the Leo soon found the freedom to experiment under its new name, even playing exploitation and “adult” fare as the former Queen was no longer concerned about quality audiences / “public favor.” They just needed people to come through the turnstile.

The rebranding didn’t work. Much as the film industry was in retreat, the Leo was swept under as other theaters would convert to Cinemascope or VistaVision, the Leo was simply old school. In 1953, the Leo was flailing and turned to live 10-act vaudeville under the direction of Richard Crane perhaps to change its fading fortunes. Crane promised no burlesque at the Leo, just vaudeville for 60 cents. When that didn’t work, the Leo tried the combination of films and burlesque for two months thereafter. But nothing worked and the theater was shuttered on April 15th, 1953 after 40-plus years of total service though less than five as the post-regal Leo.

The Dallas Federal Savings and Loan Association (Dallas Fed) secured the site planning to bulldoze the Queen Theater in 1953. But that project was delayed at the last minute apparently left the city with what locals called an unfortunate eyesore for two years: a shocking turnaround for the former palace. Only the cigar store associated with the theater soldiered on until the bitter end of the building’s life. The Queen was finally abdicated on November 4, 1955 when the wrecking ball struck. Because all references to the Leo were removed from the building in 1953, the theater’s demolition coverage only referred to to it as the former Queen Theater. In some respect, that was a nice final touch recalling the theater’s glory days which had left such a lasting memory to Dallas' moviegoers and provided classy showmanship in silent film exhibition in the 1910s and 1920s. And onward to progress, the Fed’s modern 17-story skyrise was scheduled to be completed in 1957 in the Queen’s former spot.