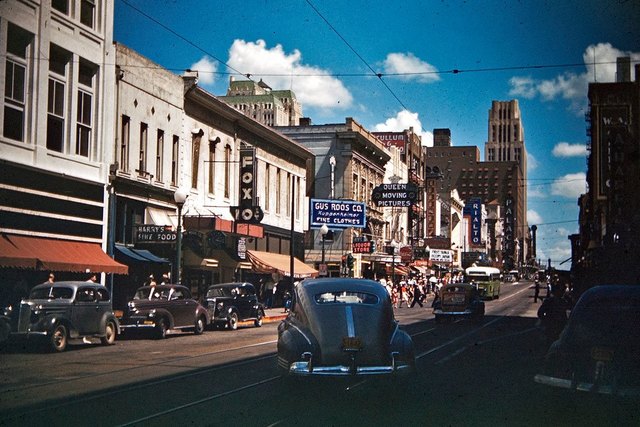 Located on Elm Street at N. Akard Street. The Fox Theater was a burlesque stage show theater which opened March 19, 1922. It was also listed in Film Daily Yearbook editions from at least 1941, thru to 1950 and beyond…..

There is an enormous office building at 1401 Elm that takes up the odd side of the block. No sign of any theater building.

The Fox theater was demolished during the late fifties, in fact all
theaters on Dallas Elm Street Movie Row are gone except the Majestic.

An old burlesque theater ad from 1949 for the Fox Theater in Dallas.

Status should be changed to closed/demolished.

Sorry to disagree, panhandle, but this place was still running “burlesk” as late as the very early 60’s. It and the whole block went down to make way for the First Nat'l. Bank Building (52 stories, tallest west of the Mississippi at that time), which is now called Elm Place, is being foreclosed on, and has an occupancy rate of about 30%.

In transitioning to the new format, many comments have been deleted/lost.

At any rate, here’s a link to a shot on my flickr page that has a view of the old Fox in the extreme lower left, red neon sign turned on. Check the vintage of some of the cars on Elm.

The corner of Akard and Elm is an intriguing one in Dallas cinema history. Of course, home to the Fox Theater in the 1920s and into the 1960s, the original Palace Theater was hastily carved out within a storefront by legendary Dallas exhibitor P.G. Cameron in 1906 in the same building. Cameron played Edison films with the licensed Edison projector with a 50 cent bed sheet to paying audiences who stood and watched the short films. Cameron would then rent chairs for patrons to be more comfortable.

The Nickelodeon era at this and other nearby locations provided Dallas with its first novelty theater row with the Princess, Palace, Candy and Empress together in rather unsubstantial show places. The Palace was no palace and the Empress was not regal. While not the first to exhibit movies, Cameron was a pioneer who left the Palace and moved to the Lyric as well as many other local theaters.

The Palace was gone and the building would get a major facelift at the start of the 1920s and renamed the Roos Building for the popular Gus Roos men’s clothing store. Within the Roos Building was an improved theater experience. A 280-seat theater known as the Fox Theater was created by Fooshee and Cheek Architects within the Italian Renaissance building.

When one thinks of the Fox Theatre, one might recall the glory days of the Fox in Atlanta, San Francisco, St. Louis, or Detroit. The Dallas Fox in name only was actually started by and named for local businessman Max Fox, no relation to the fabulous Fox' lineage. Fox also operated the original Strand Theater in Dallas in the late 1910s and into the 1920s. The Fox opened in February of 1922 with a soft launch. Its grand opening was March 20, 1922 with Mary Pickford’s “Through the Back Door.” If one wants to make a connection to the film’s title and the Fox Theater’s business trajectory, so be it. Matt Fox left the exhibition business before the advent of sound but the theater bearing his name carried on under new management.

The Fox was a true independent running eclectic fare that ranged from standard film fare, live burlesque-centric acts and film shorts, to four-wall feature films that might contain exploitation and risqué content with little advertising. While the Queen, Majestic and others were creating a true movie boom in Dallas, the Fox stuck more to lower class fare and presentation. The Fox made the transition to sound, survived a minor fire in 1929, and soldiered through the Depression probably thanks to the success and traffic generated by the Roos Men’s store. In 1932, two tear gas incidents took place as a man threw tear gas canisters apparently to rob purses and other left behind items. As a sign of the time, a woman burned in the tear gas incident lived in a tent camp in south Dallas.

The Fox hit its stride in the 1940s playing high profile films that had been banned or were controversial. Alfred Sack of Sack Amusements would lease the theater in what appears to have been a four-wall arrangement to exhibit his racy – often foreign – films and his exploitation films such as “Bucket of Blood.” In other times, the theater was leased to the VFW for a weeklong-engagement of “Ravaged Earth.” But the racy films were winners and provided the Fox with consistent fare. The first feature film entirely shot in a nudist camp, “Elysia,” played three weeks in its initial run and sold a phenominal 11,462 tickets “including many repeat patrons” according to reports. Ecstasy, also exhibited by Sack, filled the house and said the report, “The 50 cent movie customers, after their first timidity, have patronized the picture (due to artistic rather than exploitative reasons) without glancing around to see if anybody recognized them entering or leaving the Fox.” But – that said – was the Fox’s reputation at the point and for the rest of its existence.

The racy films came with much scrutiny by local officials. A newsreel about a nudist colony by H.M. Glidden was seized and appears to be the first arrest of the Fox operators in October 1943. After the war, many of Sack’s more artistic foreign films were also doing well for the Fox so much so that Sack would create his own art house called the Coronet north of downtown. Once art films found their place in post-war suburban theaters such as the Fine Arts and Coronet, there was only one for the Fox to go and that was even more risqué. The films got much less artistic and more exploitative drawing questionable audiences as it became much more akin to a grindhouse with continuous shows all day. If the Fox had only stopped before 1955, the story of the theater would have been just that. Unfortunately, a wall fell killing four and injuring eight in June of 1955. Just two months later, the theater cooperated in a local raid leading to 20 charges of sodomy over a five-day undercover sting.

The Fox became known less for film and more associated with the burlesque scene in the late 1950s and just into the 1960s as the Barney Weinstein’s Theatre Lounge moved downtown from the Colonial Theater and Jack Ruby’s Carousel Club became the places to go. The word “Theater” was replaced with “Burlesk” on the marquee — of course — followed by “closed” as the establishment finally ceased operation. A classified ad in October 1961 has all of the contents including the seats for sale which marks the end of the Fox. The building appears to have been demolished in February 1962 replaced by the skyscraper First National Bank Building during a massive City of Tomorrow renewal plan. The historic film location at Elm and Akard was no more.

1945 photo added courtesy of the History In Pictures Facebook page.

Closed October 1961. Demolished February 1962 as part of the “City of Tomorrow” urban renewal plan in Dallas and replaced by the First National Bank building.